The newly released iOS 5.1 contains minimal changes in the way of actual tangible feature additions, but it does include some Siri support for additional markets as well as fixing over eighty one security flaws, and if internet murmurings are anything to go by then it looks as if it has also brought improved battery life.

If however, you are among one of those who prefer their iOS experience to be a jailbroken one, then the announcement of iOS 5.1 just serves as a reminder of something you can’t have just yet. As we all know, installing the latest version of iOS would wipe any jailbreak and at the present moment it is only A4 device owners who can benefit from 5.1 liberation, and even that is of a tethered nature. During the Apple event last Wednesday, the company also announced the immediate release of a new iPhoto app for iOS as well as updates to various stock and official App Store apps which brought improved features as well as full support for the new Retina ready iPad. 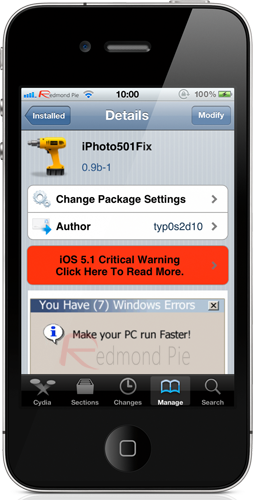 Normally, the introduction of an impressive app such as iPhoto would be considered great news, but the fact that it has a dependency on iOS 5.1 being installed on the device means that jailbreakers can’t get their hands on it just yet – or does it? As is usually the way when something seems impossible, the jailbreak community has stepped up with a way of making the impossible entirely possible. We recently brought you an article which showed how to edit a .plist file on device to trick the App Store into thinking iOS 5.1 was installed in order to bypass the version dependency. The trick allows iPhoto to be installed, but unfortunately the app still crashed when attempting to scan the device photo library.

Step forward a developer by the name of typ0s2d10 who has released a fix into the Cydia store known as ‘iPhoto501Fix’ which patches the iPhoto app, preventing the crash from occurring and allowing jailbroken iOS 5.0.1 users to experience iPhoto without the need to update their firmware to the latest version. 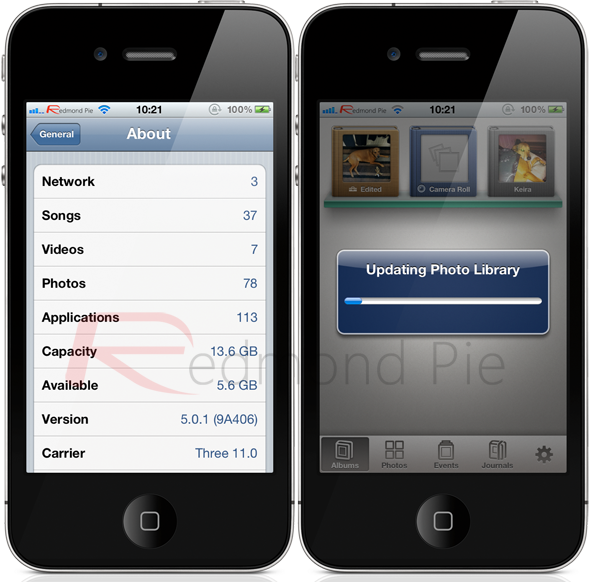 For those that have been experiencing this issue, following the steps below should solve the problem:

NOTE: The following instructions requires your iOS device to be jailbroken. For jailbreaking the latest iOS 5.1 (tethered), follow the instructions posted here to jailbreak using Redsn0w, or here for Sn0wbreeze. For jailbreaking iPhone 4S and iPad 2, you can simply follow our step by step tutorial posted here to jailbreak iOS 5.0.1 using Absinthe on Windows or Mac. Those of you with an iPhone 4, 3GS, iPad 1, and iPod touches can use Redsn0w or Sn0wbreeze to untether jailbreak on iOS 5.0.1.

Step 1: SSH into the jailbroken iOS device using a client such as FileZilla or CyberDuck. Alternatively, use the iFile file explorer from Cydia to gain quick on device access.

Step 2: Navigate to /System/Library/CoreServices and then scroll to the bottom and open the SystemVersion.plist with a text editor.

Step 3: The .plist file contains <string> tags at the bottom which holds the installed iOS version. Edit the string to read ‘5.1‘.

Step 4: Save the edited .plist file and exit. Respring the device, then open the App Store, search for ‘iPhoto’ and then download.

Step 5: Open up Cydia and search for ‘iPhoto501Fix‘. Install the fix as per any other Cydia package.

Step 6: Respring the device and then run iPhoto app. The application should scan the photo library without issue, providing full access to the application.

Be aware that the iPhoto must be installed on the device before the iPhoto501Fix package is installed from Cydia.