Since the introduction of iOS 5 in October 2011 to the public, Notification Center has been a staple part of the iDevice diet for users and has brought about an efficient and easily accessible method of accessing any device notifications. Even though Notification Center is used daily by iPhone owners and has been extremely well received, there are obviously a few things that users would like to change.

Once installed, DisableNC Switch disables iOS’s ability to invoke Notification Center when a full-screen application is active on the device. Developers of iOS apps have the option to remove the device’s status bar, meaning that their apps will effectively run on the whole of the device’s display. It is within those apps that DisableNC Switch makes itself at home by disabling Notification Center completely. 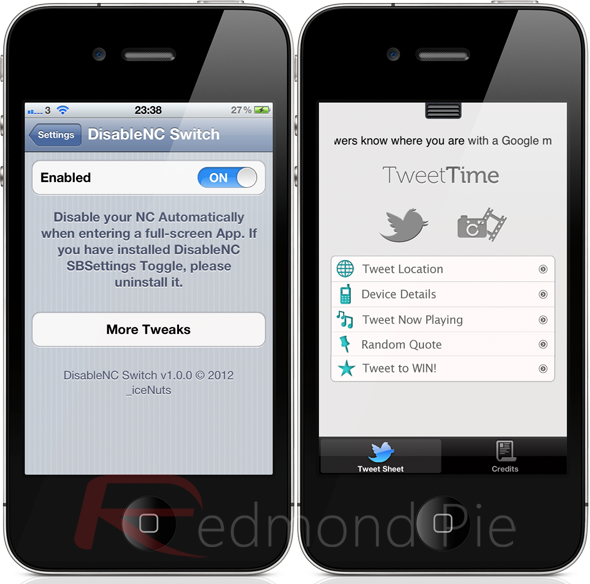 After installation, DisableNC Switch adds a dedicated preferences bundle to the native Settings apps that allows the extension to be toggled on or off and also contains a small amount of developer written information about the tweak itself.

The information basically outlines the tweak’s purpose as well as informing users that they will need to uninstall the DisableNC SBSettings toggle to use this tweak.

This particular tweak can get added to the Notification Center extension list, and will no doubt be useful to a lot of users who have encountered this rather annoying user-experience issue. On a platform where Notification Center-based packages are becoming ten a penny, DisableNC Switch is one that actually does seem to overcome an issue that people have experienced.

DisableNC Switch is available to download from the ModMyi repository and requires a jailbroken device running iOS 5 or above.