How To Check If Your Android Device Is Rooted Or Not

We know what you Android users have been thinking: there is nothing worse in this world than thinking that you have root privileges on your favorite smartphone or tablet only to find out they have magically gone missing. Okay, so maybe the harsh reality of life does throw a few challenges at us that are significantly worse than that, but it can still be extremely confusing, annoyingly problematic when such a thing occurs without warning. If you’ve found yourself in this head-scratching situation then it’s time to check out Simple Root Checker.

Simple Root Checker is one of those fantastic little apps that has been named quite literally. It isn’t yet another weather app wrapped in a technical sounding name. Nor is it a talking kitty that you can tickle, feed and play with. The app, which has been created by a developer named CrotaNexus, allows Android users to efficiently check whether or not the device has the necessary and functioning installation of a number of root pre-requisites.

The developer of the app simply defines the app’s functionality as offering “the possibility to determinate, thanks to specific controls, the presence of the Root permissions, Superuser application and the proper installation of Busybox, showing also the version“. If that rather succinct definition doesn’t mean anything to you then the app also contains a rather comprehensive Frequently Asked Questions section that should shed some light on the world of root to novice users.

There are a number of reasons why a user might be a little surprised to learn that they no longer have root access on the device. Over-the-air firmware updates can sometimes be the cause of a lot of heartbreak. Sometimes it isn’t immediately evident that something has gone wrong during the process. As pointed out over at the XDA Forums, it could also be an issue that is caused by the lack of BusyBox (a single executable that contains multiple common UNIX utilities). 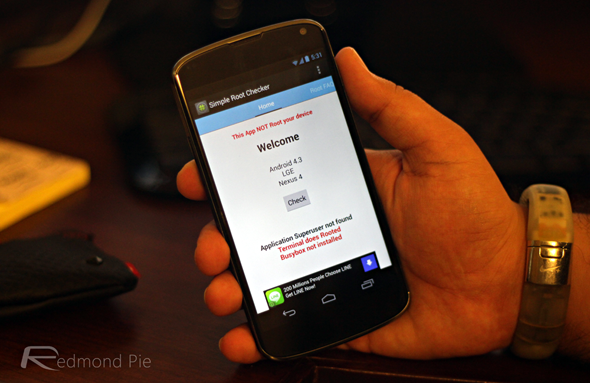 Whatever the cause, there is now no need to waste countless hours trying to go through processes that require root access when it isn’t available. Simple Root Checker is a comprehensive solution that is available to download for free, although it probably should be noted that this app DOES NOT actually root the device.

(Download: Simple Root Checker for Android on the Play Store)