Even though Apple dished out a bunch of useful improvements and enhancements with the big iOS 7 update, there are still certain aspects that could well be improved. In fact, given how there’s still no way to quickly compose or reply to a message without stepping away from the current task at hand, we’d go as far as to say that iOS is still significantly bereft in several key areas, and whilst such functionality can be readily achieved via jailbreak, it’s always better to have these options at stock level. One wily iOS user has found a makeshift way of quick-replying to and composing messages without having to jump to the Messages app every time, and although it’s somewhat limited, we also think its pretty neat.

Many stock apps, as well as those of third parties, include a handy share button, which allows for content such as photos to readily be shared with others via email, Facebook, and handily, Messages. Whenever you see this particular button, you can tap on it, and when you see the little pop-up, all you need to do is remove the characters from the message box, select the contact you wish to communicate with, and you’ll be able to scroll through past messages with ease. 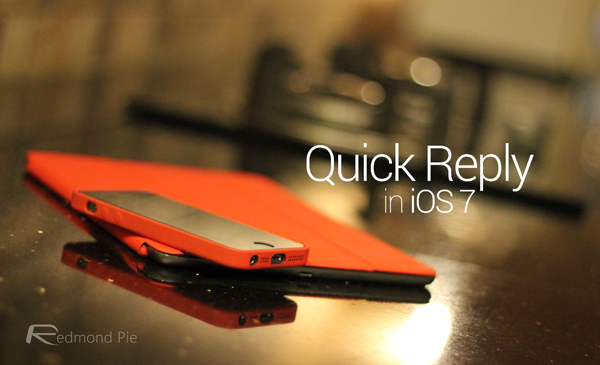 From there, you can add to the conversation if you so wish by shooting your co-correspondent a new message, and even though you need that share button in order to get it going, it’s certainly a good little tip to know of until Apple finally comes through with something similar natively.

As well as only working in certain apps where the share option is present, it also merits a mention that it cannot be accessed from the lock screen. But hey, if you’re not jailbroken and moreover, have no intention of jailbreaking any time soon, then this is currently as good as it gets, so if you’re an avid messenger, be sure to give it a try.

Below is a video demonstration of how the tip works as presented by YouTuber jakx102, and let’s just hope – with two weeks to go now until the Worldwide Developers Conference and subsequent unveiling of iOS 8 – that we won’t have to keep devising ways to utilize what should by now be a pretty standard feature.

Thanks, Jacob for sending this in!