It didn’t go unnoticed that Apple did their very best to incorporate some of the best jailbreak functionality into this upcoming iOS refresh, which in itself means that a number of developers will need to go back to the drawing board for future tweaks. Designers involved in the jailbreak community can have a great deal of fun to bring those fresh iOS 7 visuals to jailbroken iOS 6.X devices, which is exactly what Surenix has done with the release of his iOS 7 Control Toggle Icons pack. More details can be found right here!

The new aesthetics of iOS 7 beta have already split the iOS using community. Some users understand that iOS was in dire need of a refresh and are willing to embrace the new direction which Apple has taken. Some users on the other hand were perfectly happy with the skeuomorphic green felt and leather stitching that can be currently found throughout the operating system in its current form. Surenix is well-known for producing cutting-edge themes and user-interface assets for popular tweaks, and he has put that talent to work by producing a set of icon toggles for NCSettings that mimic the look found in the new iOS 7 beta Control Center. 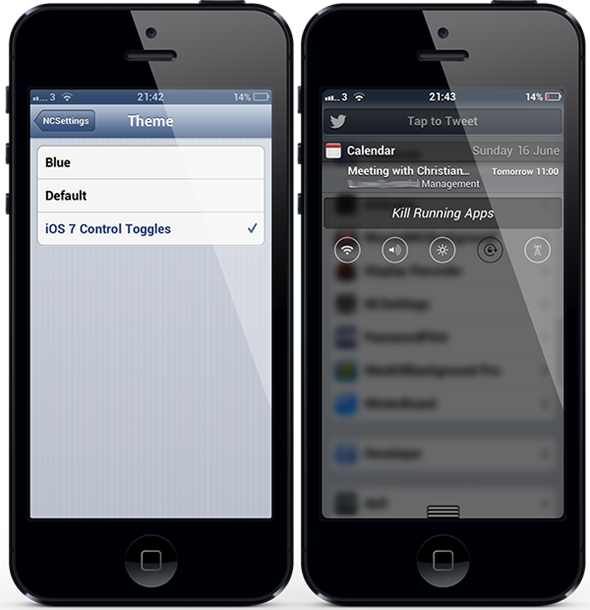 The iOS 7 Control Toggle Icons pack is a complimentary offering that is only really useful to those individuals who currently use the fantastic NCSettings package to toggle system settings on and off via iOS Notification Center. Although the bare functionality of NCSettings is extremely powerful, the fact that it allows themes and can be skinned makes it extremely appealing to a lot of users – especially those looking to replicate the iOS 7 feel without the risk of installing beta firmware.

To get a fully authentic Control Center feel it’s also recommended that the user installs a tweak that blurs the background of Notification Center. For the sake of this article and screenshots we used the BlurriedNCBackground package that is also found within Cydia as a free download. Simply download the icons pack, download the blurred background effect and activate through WinterBoard. The final step is heading to Settings > NCSettings > Themes and making sure the newly downloaded icon pack is activated. Keep in mind that this is a Control Center like implementation and can be activated using the Notification Center only, unlike how iOS 7 beta implements it using an upwards swipe gesture from the bottom of the screen.