E-Mail account hijacking is a big problem in our digital age. The convenience of sending instantaneous information electronically has seen handwritten letters nearing extinction. Many people rely greatly on their e-mail accounts for work as well as to keep up with those closest to them. Microsoft’s Hotmail service has long been soft a target for hacks and attacks, and is now upping the ante in order to protect its customers.

If you suspect that your friend’s account has been compromised, you can now report it as such. It is often the case that the contacts of said hacked accounts are the those first aware that the account is in the wrong hands due to the barrage of spam thrown in their direction. With one click, you can now mark messages as, “My Friend’s been hacked!” a  feature which is unique to Hotmail, and it is hoped will be a damage-limitation mechanism. 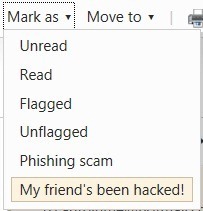 Ultimately, stemming the problem at the source would help stem rife account jacking in the first place. Hotmail has addressed this issue too – it is now impossible to enter what is considered a ‘weak’ password when signing up or changing your account settings, which makes your account an easy target from the get go. A wise move since, unless you’ve ever had your account seized from your control, a color coded message telling you your password is weak doesn’t always cut it as a sufficient deterrent. It’s surprisingly common how many people use the password “123456” or “abc123” in this day and age. Furthermore, Hotmail also hopes to add a feature whereby users will be asked to change their weak passwords to something more substantial or risk being sitting ducks to online criminals

Crimes such as those which play on people’s compassion are becoming worryingly frequent. Fraudsters hack into accounts and send messages to friends or relatives pleading for money to be freed from a life-threatening situation. Most of the time, a simple phone call between the recipient and the said party prevents any transaction from taking place, but it is a mostly avoidable situation if the correct measures are taken to keep security threats to a minimum.

The system has reported some success already since being partially tested out over the last few weeks, and already helped thousands of accounts to be returned back to their rightful owners.