Apple’s iPhone X is an extremely impressive piece of kit for a number of reasons. It also introduces a number of “firsts” for Apple and iPhone, including functionality like Face ID and an OLED panel which provides unbelievable clarity and color accuracy.

However, as a variety of device teardowns have shown, iPhone X is also the first iPhone released by Apple which comes with two batteries, both of which are rated higher than the batteries found in Apple’s iPhone 8 and iPhone 8 Plus hardware released in September.

According to TechInsights, the inclusion of two individual batteries was immediately visible as soon as the back of the device was removed to expose the internals. Apple’s specification website doesn’t pay any reference to the fact that two batteries exist inside iPhone X, choosing instead to say that it simply comes with a “built-in rechargeable lithium-ion battery,” which is the same terminology used for iPhone 8 and iPhone 7. The TechInsights teardown suggests that the second battery gives iPhone X an additional two-hours of power over iPhone 7 Plus: 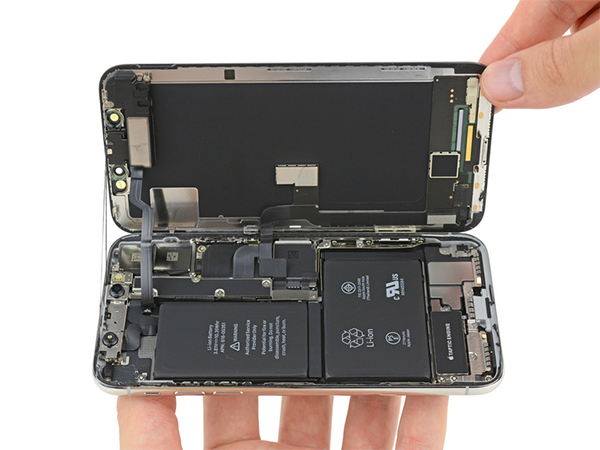 There is the potential that it can all get a little bit confusing. The official information on iPhone X suggests that the battery “lasts up to 2 hours longer than iPhone 7,” but also suggests the same “up to 12 hours” internet use and “up to 13 hours” video playback time as iPhone 7, meaning it’s very confusing to actually ascertain where this additional two hour comes from. The teardowns of the device also show that the two batteries in iPhone X are now even easier to remove than before thanks to the inclusion of four tabs, but that the all-glass back on the device actually makes it very hard to access the internals, meaning that iFixit can still only give it a six out of ten for repairability.