Remember, two days ago, when we published a post on an entire image gallery of a dozen or so leaked “new iPhone” parts? Well, quite a few of these parts were beyond this writer’s understanding; things like Power / Reaction Flexes made no sense to me.

Thankfully, we’ve come across a diagram that puts the different parts into context. Check it out after the jump.

The image comes in the form of a short post from our friends over at 9to5Mac in which they cite iFixYouri as the source. The diagram shows the position of some of the parts leaked on the new iPhone’s recently leaked motherboard. It’s not the most well-made images ever, since there’s a lot of cut and paste and seriously no scale at all, but it gets the jobs done. 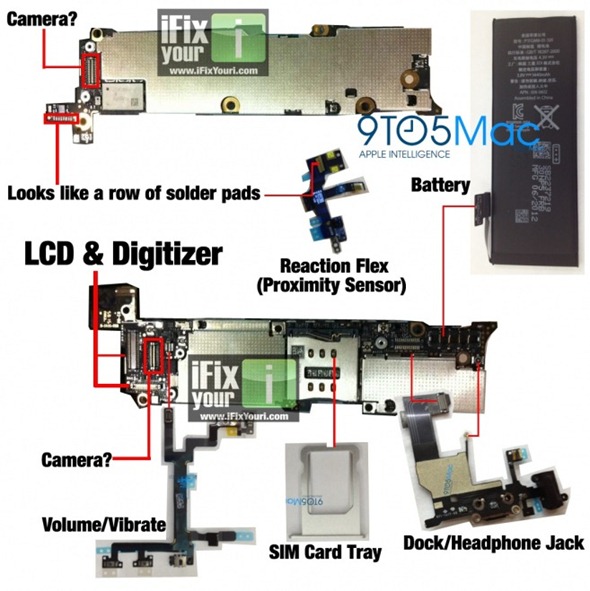 As I’ve stated before, not a whole lot can be taken away from these leaked parts as, to be straightforward, (save for the front and back panel) they aren’t significantly different from parts we saw for the iPhone 4 / 4S.

This year, we saw two different sized SIM card slots leaked: nano-SIM and micro-SIM. According to 9to5Mac, this suggests that Apple has tested both SIM card types, with no idea of which SIM card they finally decided on.

The battery, as we mentioned in a separate article before, is only very slightly larger than previous two iPhones. It has a capacity of 1440 mAH, voltage of 3.8V and a wattage of 5.45 wHr compared to the iPhone 4S’ 1430 mAh, 3.7V and 5.35 wHr battery specifications.

From the leaks we’ve seen so far, I don’t think Apple will be able to really woo the audience like it did with the overhaul in iPhone 4 which had some really game changing features like a Retina display, a much faster processor, a vastly improved camera, front-facing camera, and a beautiful all new design.

The sixth generation iPhone – which is expected to be named the new iPhone like the new iPad – is strongly rumored to come with a taller, 4-inch display, and 4G LTE connectivity. In accordance with previous trends, it will have a new, slimmer design that you can check out here.