As far as the evolution of the smartphone is concerned, manufacturers have begun to hit a bit of a brick wall. Every high-end handset is packed with the latest features, and release cycles are occurring more regularly than the exciting new technologies within them can be evolved. As Amazon has already demonstrated with the Fire Phone, 3D display tech. could well be the next big thing as far as the mobile world is concerned, and a new patent given the green light by the United States Patent and Trademark Office indicates that Apple is also considering such a move in the UI department.

It would be rather naïve to get carried away at this point, particularly since many, if not most of Apple’s patents tend to amount to nothing. But with Amazon having already dipped its toes in the water, it’s reasonable to suggest that in the near-future iPhone may also indulge, and with parallax having been introduced with the iOS 7 software last year, it’s clear that the Cupertino is a fan of enhancing the UI with such visual effects.

It’s hard to glean a great deal from the patent itself, but it appears that an iPhone’s gyroscope would be utilized for the purpose of orientation, and the 3D UI would automatically adjust without any user intervention. Like the current portrait and landscape views within iOS, which spring into action when a device is turned a certain way, the display would continue to create the 3D illusion no matter which way the device was placed, and once again do so without requiring a user to interact.

Whether this technology will be put to good use any time soon remains to be seen. There have been lingering reports that the next-generation iPhone may offer a “glasses-free” 3D display, and while it’s unclear just how much substance there is to these suggestions, this patent does offer a glimpse of how said glasses-free 3D might eventually operate. 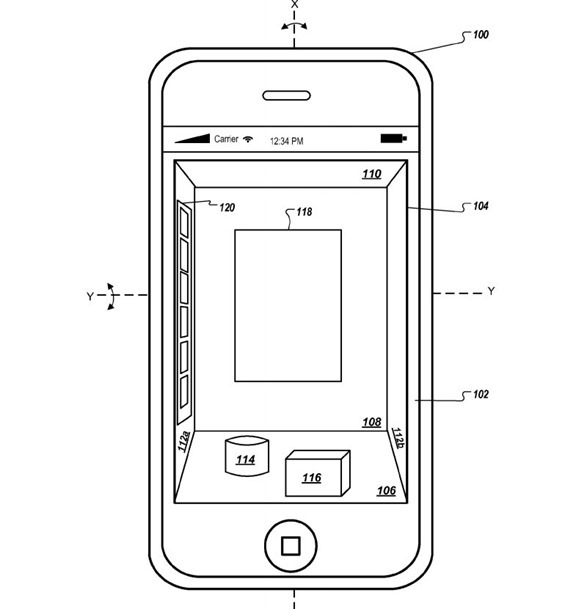 Should the iPhone bring 3D to the fore next year, it’s likely that the iPad will eventually do likewise, but given what happened with Touch ID, Retina displays and other such major enhancements, we wouldn’t expect the company’s treasured tablet to join the party until the following year.

Does the idea of a 3D iPhone interest you? Do leave your thoughts via the usual mediums below!