The ongoing spat between Samsung and Apple is turning into one of those rather depressing proses where an allegiance breaks down, descending into all-out war.

OK, so being two large and competing corporations doesn’t exactly constitute a friendship. However, up until rather recently, the fruit company was more than happy to lean on the Korean company for much of its LCD needs.

Apple is adamant Samsung has been copying its product range, particularly the iPad. When you consider the influence of Tim Cook’s company on the tablet market, it’s hardly surprising. Having said that, many other companies have churned out similar products and have avoided the wrath of Apple’s court house marksmen, who’ve presented a rather humorous impression of how its bitter rival’s tablet offerings would, and should look minus the Cupertino company’s influence. 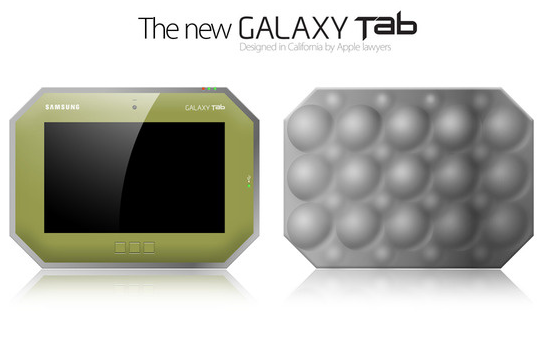 Whilst we may laugh at what is quite an entertaining spectacle, it’s not clear as to how serious these lawyers are being with the presentations. As Gizmodo points out, they’re either "imbeciles and/or clueless mischievous snakes" looking to make a mockery of Samsung and the situation in general.

The list of Apple qualms regarding Samsung’s tablets demand:

• Shapes that are not rectangular with four flat sides or that do not have four rounded corners.
• Front surfaces that are not completely flat or clear and that have substantial adornment.
• Thick frames rather than a thin rim around the front surface.
• Profiles that are not thin relative to [Apple patent D’889] or that have a cluttered appearance.

There’s no question the Samsung Galaxy Tab has, at least to a degree, ripped-off the iPad in terms of design. But the aforementioned suggestions take things to extremities with unrealistic requests.

If the Samsung-Apple pot hadn’t boiled over to such a high temperature as it has, then you would expect Apple to kindly ask Samsung to tweak the design, rendering it unmistakable for an iPad, and in turn watch Samsung oblige.

Such pleasantries seem dead in the water though, and with the battle ongoing across the world, it’s going to remain a belligerent, court-based debacle.

All that can be said is this; credibility is a huge factor in such commercialized business, and it does seem that although Apple does have a case, it’s turning into something of a circus, and doesn’t reflect greatly on either party involved.