Dropbox may all but have the online storage race sewn up, but Microsoft’s got a little service of its own that it likes to think of as a real competitor to Google’s dominance – Drive. SkyDrive may not be on the tip of everyone’s tongue when talking about places to store data in the cloud, but with 7GB of free space from the get-go, they perhaps should be.

Did we say 7GB? Oh, we meant to say 10GB – assuming you’re a student that is. And live in the United States. Fit the criteria and want more details? Keep on reading.

This SkyDrive for Students website is the place to get the lowdown on the offer, but basically college students in the U.S. will receive a code that unlocks the extra 3GB of space when they give Microsoft a valid .edu email address. Once received, the code has to be entered into the student’s SkyDrive account by December 31st this year, and it will entitle that student to an extra 3GB of data for a year from the date the code was entered.

Whilst only open to students in the United States, the offer could be a compelling one, especially if the student in question owns a Windows 8 PC and a Windows Phone smartphone. Both the platforms hook into SkyDrive natively while other platforms simply do not, making it a more interesting deal for them. 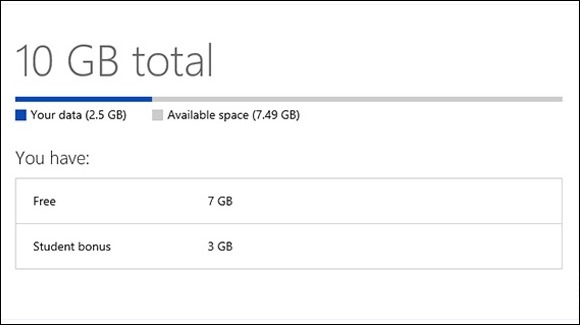 It’s not clear what will happen when those twelve months are up, but we doubt Microsoft will just lop 3GB of data off of someone’s SkyDrive account. Obviously the idea is that people then start paying for the extra headroom, but if you don’t intend to do that then it might be worth having a plan for when that 3GB goes bye-bye this time next year.

We’re big fans of Dropbox or the self-hosted OwnCloud here at Redmond Pie, and must confess to not being heavy SkyDrive users for a number of reasons. We do know people who swear by it though, and with 3GB of storage absolutely free, it’s got to be worth looking into if you’re someone that qualifies for this particular deal.

So, you’re a student and want to sign-up for the whole deal? Simply point your browser to SkyDriveForStudents.com and get started by pressing that Get it now button on the page.