One feature iOS is surely lacking, at least compared with its main rival Android, is the ability to add and enjoy custom launchers. Having recently switched from Apple’s fair ecosystem to Google’s as my daily driver, it’s the one feature to which I have become most accustomed. But thanks to the jailbreak scene, iOS doesn’t have to be a launcher-free zone, and Instalauncher, a new tweak over at the BigBoss repo, allows you to activator-set a launcher that allows you to quickly access any of your currently installed apps.

Navigating through a trove of icons is a rigmarole most iOS users will be familiar with. Although this will no doubt change with iOS 7 and its relaxed, intuitive folders system, iOS 6 is currently very limited, with only twelve icons allowed to grace any one folder at a given time. Considering iPhones run all the way up to 64GB of storage and double that for the top-end iPad, it stands to reason that many users will be running hundreds of apps, and minus Spotlight search, accessing any one of those apps can be a cumbersome experience to say the least. 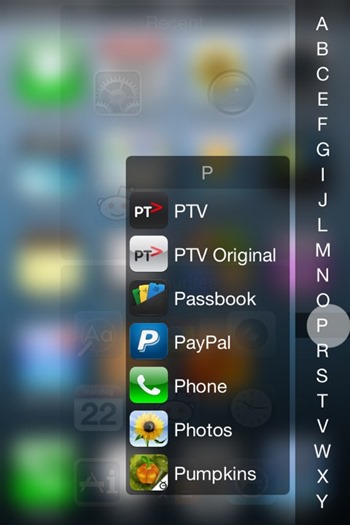 What Instalauncher brings is an entirely new approach to finding apps on your home screen. It can be triggered by the Activator gesture of your choosing, and from there, you can sort through your apps with relative ease. Instalauncher alphabetizes every app you have installed and allows you to quickly shuffle through them as if they were tracks within the Music app, and with a recent and favorite segment to boot, you needn’t be scratching around looking for that certain app any more.

It truly does bring the kind of intuition only really currently available on Android, and all this in a neat, iOS 7-esque interface. Even though Apple has clearly been hard at work in improving its mobile platform with the forthcoming version, tweaks like Instalauncher have us wishing the Cupertino company had gone a step further and implemented something similar. 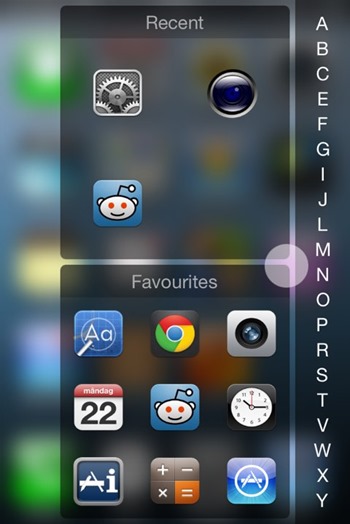 The tweak does cost $1.99 over at the BigBoss repository, but in my opinion, that’s a bargain. Download it for yourself and be sure to leave your thoughts and comments below.