No matter what platform you may be using, arming yourself against the continual wave of malware should be a top priority, and if you happen to be a Mac user, you’ll be pleased to learn that VirusTotal has just announced an app for Apple’s OS X. It’s called VirusTotal Mac OS X Uploader, and given its reputation for wheedling out and eradicating malicious intrusion before it can wreak havoc on your devices, is sure to be a hit on the Mac as well.

With variants of its software available on Windows, mobile and browsers, it always seemed like a Mac version would arrive at some point, and fashionably late, it seems, the Google-owned VirusTotal has finally brought forth an anti-malware suite for OS X.

With these scanning / security apps, it’s often the case that they run in the background, only alerting you when they’ve found something afoot. But with VirusTotal Uploader, you can also drag any app, file or folder in for a quick scan, offering you peace of mind on any downloads you may have picked up from questionable sources.

With 50 different malware databases, VirusTotal is about as thorough as any tool you’re likely to find for Mac, and given Google’s reputation for producing largely reliable software – insert a snide comment re Android here – we’re sure that VirusTotal will be no different.

Apple’s OS X was, until fairly recently, largely ignored by those creating viruses and malicious code, but as the popularity of the Mac range – thanks largely to the MacBook line – has continued to increase, so have the cases of malware and such. The Flashback malware was the most high-profile back in 2012, but while there hasn’t been an outbreak of this severity since, it’s still of paramount importance that Mac users continue to arm themselves against the non-niceties of the Interwebs. 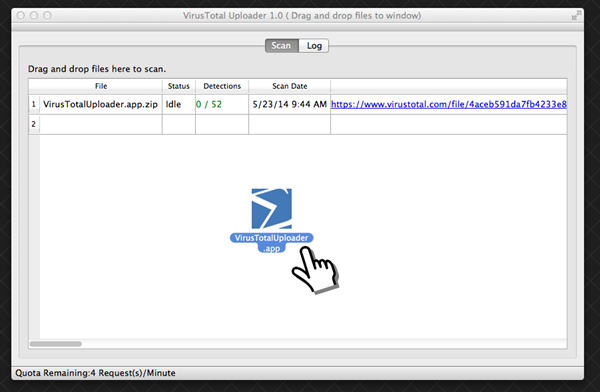 Like essentially all Google software, VirusTotal Mac OS X Uploader is absolutely free of charge, and can be downloaded right now from the company’s official site. Simply point your browser to the link below, and install when prompted.