If there is one thing which we love the most apart from an official launch of a new smartphone from manufacturers like Apple or Samsung is when concept developers throw their hat into the ring and produce some seriously gorgeous looking renders of entirely fictional devices. It isn’t uncommon to see designers producing images of what they believe new Apple devices will look like, but this time, it’s the turn of Google to get the treatment as Dorian Lust has knocked up what he believes a possible Google Nexus device could look like.

To be honest, any device – regardless of whether it is an actual product or totally made up – that features a curved glass design will always get my vote of confidence. Unfortunately, I can’t share the same enthusiasm about the integrated kickstand that Lust has decided to include in his design, but we have seen in the past with actual shipped products that users do seem to have a liking for this type of integration. The curvature of the glass has been included for ergonomic reasons, and to fit perfectly into the user’s hand, the kickstand is more than likely added to allow easy watching of movies or other media through the beautiful display.

Once upon a time, designers used to just produce some nice images and concentrate purely on aesthetics with no thought or attention paid to what the imagined device will feature under the hood. Thankfully, a recent shift in concept design means that we generally get a made-up specification to go with the artistic imagination with this Nexus D being powered by a quad-core 1.8GHz processor and offering the user 1.5GB of memory. Dorian obviously sees the device as a media hungry gadget as the minimum storage size would be 32GB, with a 64GB version also on the cards. 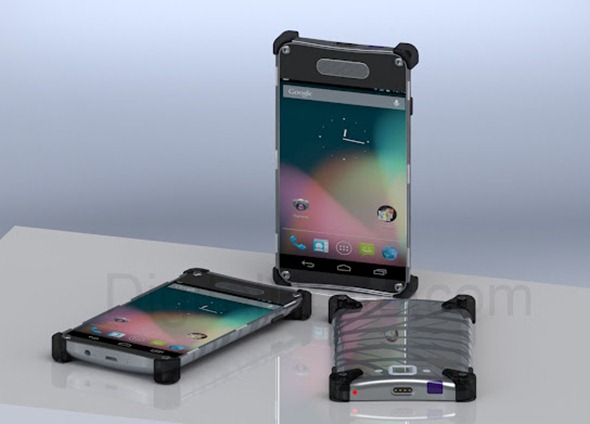 Built-in Wi-Fi, shock-resistant materials and NFC technology ensure that the owner of the Nexus D will be at the cutting edge of mobile technology. I kind of get down with the inclusion of biometric-type security features such as fingerprint and cornea recognition, but the front and rear radar detection may be taking things a little bit to far, as is the moisture meter. Putting those rather far-fetched features aside, the Nexus D concept is actually truly breathtaking to look at and would have a lot of admirers if it ever saw the light of day.