Although Google is responsible for the upkeep, maintenance and development of the Android operating system, they have been making serious waves in the iOS world over the last 24-four hours with the expected release of their brand new Maps app for the iPhone and iPod touch. Users have been expecting Google to release their own iOS based mapping solution ever since it was announced that Apple would be rolling their own Maps application as part of iOS 6, but Google has taken things a little step further by also making their Maps SDK publicly available for iOS developers to include in their projects.

The official iOS SDK from Apple allows developers to embed MKMapViews into their apps and make use of the gorgeous vector based map tiles which Apple has created, while the Google Maps SDK allows developers to access a custom-built URL scheme that effectively allows third-party apps to invoke the Google Maps app on the device rather than drilling down into Apple’s stock app. As things stand at the moment, with iOS 6 and above, the default Maps app that would be called through any such scheme would be the native Apple offering that has obviously come in for quite a lot of negativity since launch.

It isn’t just the ability to access the custom URL scheme to call the Google Maps app that should make this SDK appeal to developers. Google has also afforded developers the luxury of being able to include their mapping tiles as well as all of the held local information and real-time data that makes Google’s mapping service one of the most accomplished and reliable one available today. Andrew Frost, who operates as Senior Product Manager for Google Maps, had this to say about his company’s SDK release:

The SDK features vector-based maps that load quickly, allowing users to easily navigate 2D and 3D views, rotating and tilting the map with simple gestures inside your app. Developers can also change the Google maps view to include information such as traffic conditions, and control camera positions in 3D. 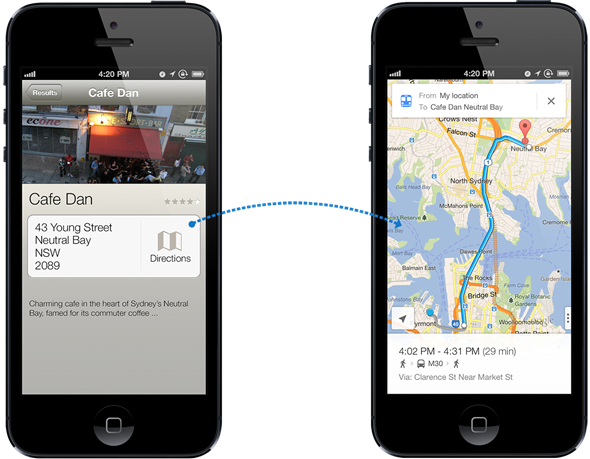 He also continues on to confirm that those wishing to use the Google Maps SDK will need to register for an API Key which is being progressively rolled out to those who register their interest in using the service. The use of the word "progressively" seems to indicate that it could possibly be well into the new year before we see apps hitting the App Store with this functionality in them.