If flagship Android devices are you thing, and keeping them looking fresh and scratch-free is on top of your agenda, then this latest project from Google and its partners is something you may want to pay attention to. As part of a collaboration with musician Skrillex, Google has introduced a limited number of cases for popular Android devices known as the “Edition” range. This isn’t just an ordinary protective case however. The accessory also comes with an accompanying live wallpaper beamed directly from above the earth by a satellite ballon named after the musician’s dog. Yep, you read that right. We couldn’t make this up.

Let’s talk about the cases first. Any purchase of one of the limited run of Edition cases will also come with a stunning live wallpaper to match the aesthetic of the purchases case. Unlike other live wallpapers that we’ve seen, this particular purchase will introduce a live feed of images of the earth at night as captured by the satellite “Nanou“. Nanou, named after Skrillex‘s dog, will also serve up constellation images for a particular location that is derived from the GPS data of the device that the case is used on. 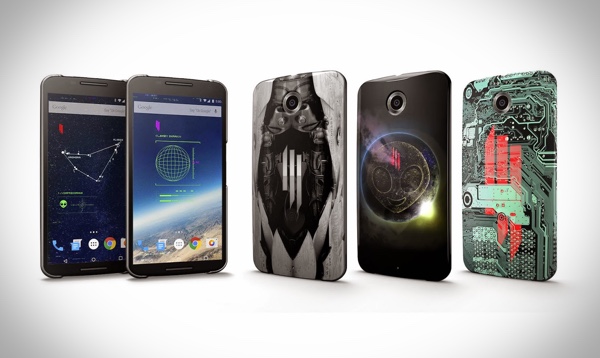 The limited edition cases will be offered up in sizes to offer compatibility with the Nexus 5, Nexus 6, Samsung Galaxy S5, Galaxy S6, and the soon-to-be-replaced Galaxy Note 4. Google is clearly hoping that this little side project will appeal to the younger generation due to the involvement of Skrillex, an electronic dance music producer who is extremely popular around the global club scene. In addition to offering compatibility with a fairly decent range of popular Android devices, the cases will also feature a choice of three unique designs that have been put together by Skrillex himself. Clearly a man of many talents. If you’re into that sort of thing.

If you aren’t excited enough by what’s been offered so far then hold on, there’s more. Every purchase of one of the Edition case will also come with a free-of-charge album download as well as the ability to navigate directly to Skrillex’s YouTube channel via a hardware button on the case itself. And, to top it all off, if you purchase a case and follow the @Android Twitter account then there’s a chance you could also win the actual Nanou satellite balloon that is feeding the images back from above the earth.

The Edition cases are available via the Google Play Store – here – and will be offered until the end of June or until supplies are depleted.