Google Glass Explorers Can Now Invite A Friend, Who Wants In?

Not many tech releases can claim to have created more of a fuss and anticipation than both the next generation gaming consoles, but the hype surrounding Google Glass is certainly giving the Xbox One and PlayStation 4 a run for their money. At present, only certain individuals have managed to get their hands on a unit of the wearable tech for testing and development of the Android-based ecosystem, but it would seem Google is now offering some of those testers a chance to invite a friend to the process, provided they’re willing to pick their very own pair from selected distribution outlets.

Google+ is currently abuzz with reports from current Glass Explorers, many of whom have been the recipients of emails from Page and Co. offering them the opportunity to invite a friend to the program. Obviously, developers will probably be sending these devices out to other developers, and this will only help the progression of Glass in the broader spectrum.

Interested parties must be residing in the United States, be at least 18 years old, and happy to pick up their device from either New York, Los Angeles or San Francisco. Considering how sought after Glass is and how few units are currently in circulation, we wouldn’t have thought anybody invited in would have a problem travelling to collect theirs.

Not all current Glass owners have been given the option to send out a golden ticket, with Google telling Engadget that rather a “small subset of Explorers” have been factored into the minor expansion. 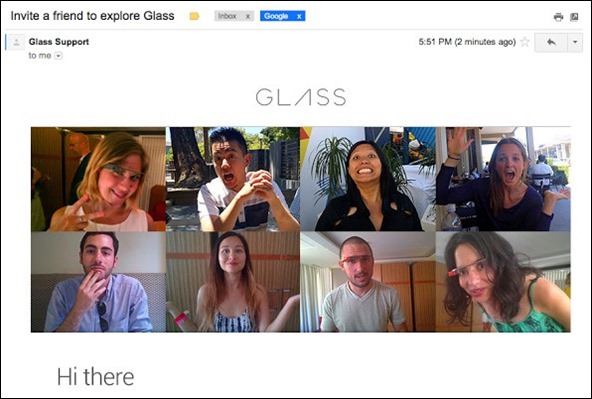 So, if you happen to know a Google Glass Explorer, now would be a pretty good time to start treating them like royalty. You never know, if they get that magic email, maybe you’ll be on your way to one of those three locations to pick up your very own pair.

The product is not expected to be hitting the market until late this year, but despite the high anticipated start price, it’s likely to sell in high numbers as intrigued consumers seek to discover what all the fuss is about.

We’ll be sure to keep you guys updated on any further news pertaining Glass, so stay tuned to our coverage here at Redmond Pie!