Here at Redmond Pie we are always on the lookout for the latest and greatest innovations to land in Cydia. Innovation doesn’t always mean inventing something entirely new, which is why we brought some early news of the soon-to-be released Control Unlocker package a couple of days ago. That package has now been officially launched and is available to download immediately from the BigBoss repository. More details can be found right after the break.

Control Unlocker – formerly known by its pre-release NESUnlocker name – embodies innovation by implementing a new and extremely unique visual method of unlocking an iOS device. Apple’s iPhone, iPod touch and iPad gadgets have become synonymous with the “Slide to Unlock” method of gaining access to what sits behind the lock screen and although numerous jailbreak tweaks have tackled this area in the past, this release from Stevie Hetelekides brings a little bit of fun and nostalgia to the situation. 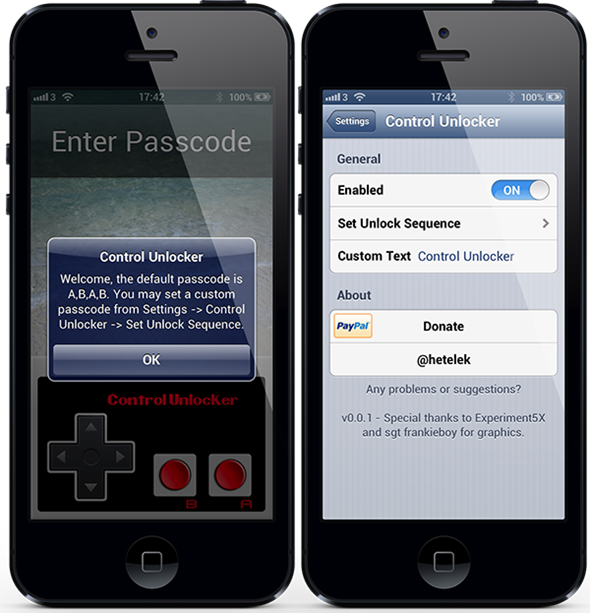 Rather than having to solely go through the usual process of sliding a finger along the display, Control Unlocker introduces a NES style video game controller into the equation that animates into view when the user has interacted with Apple’s usual sliding process. The glorious looking old-school game-pad brings the expected four way directional control as well as the famous red ‘A’ and ‘B’ buttons that so many of us remember slamming our fingers down on when playing Super Mario Brothers or Donkey Kong.

The customization options that come with the tweak allows the user to set up their own sequence by using the directional pad and the buttons as well as setting their own custom text string that is visible directly on the controller itself. There’ll be plenty of people who will love the nostalgic feelings that a tweak of this nature brings, but there will also be people who feel that the native Slide to Unlock method should have been replaced rather than operating as a two step unlock process. Still, it looks great and is free-of-charge to download and use so get going.

Control Unlocker is available as a free-of-charge download from the BigBoss repository and has been tested for compatibility with all iPhone and iPod touch models running iOS 6.0 and above. iPad compatibility is not currently supported for this tweak.