Google Glass may be generating an increasing amount of interest within tech circles, but before everybody gets carried away with what remains an exciting development, it’s worth pointing out that Google is not the only company trying to make an impression in the smart glasses market. Vuzix has already completed the development process on the M100, its own forthcoming effort to get us wearing tech on our faces, and not only is the product ready to ship from Tuesday, but at $1000, it’s a great deal cheaper than the current Explorer Edition of Google Glass.

But, of course, Google has a dedicated team working almost around the clock to get Glass ready for prime time, and with thousands of developers and creative folks helping to build apps and utilities for Glass consumers, there’s no way a cheaper option could sneak in from under the radar and upstage the Big G, right?

One certainly wouldn’t have thought so, but while Glass was initially reckoned to be heading to market this side of the new year, it has been in the public domain for a while now that commercial release won’t occur until we’re comfortably into 2014. The holiday season, as witnessed weekend with the frenzied rush of Black Friday / Cyber Monday deals, is in full swing, and while there will be the usual rush for consoles, iPads and smartphones, those looking for something a tad bit more bespoke may consider the Vuzix M100.

We don’t exactly know how much Google plans to retail Glass for, but with Explorers on the beta program currently being asked to pony up $1,500, the final figure is unlikely to deviate too far from that price tag. Thus, when we say the M100 is a considerable amount cheaper than Google Glass, we’re not talking about the kind of price difference the PS4 has over the Xbox One, although if the cheaper price and the early release can generate the kind of market response that Sony has over the past couple of weeks, the guys at Vuzix will surely be happy. 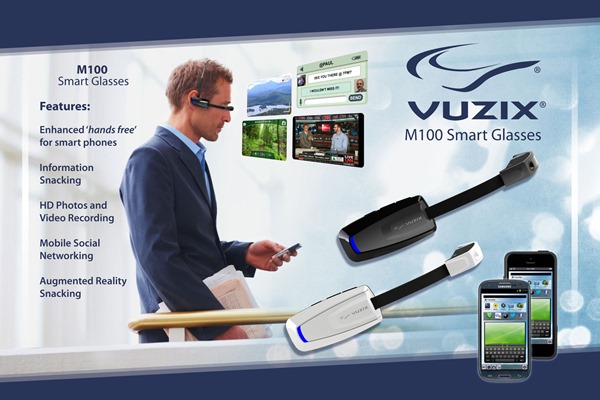 The first Vuzix models will be dished out to those who registered with its developer program, but those looking to grab the M100 before Christmas could be in luck – with pre-orders shipping within the next 2-4 weeks.

As far as specs go, the M100 runs on Android, packs a 5-megapixel snapper, and in terms of connectivity, you get Wi-Fi, Bluetooth and GPS. There’s also a head tracker, speaker and mic, so as you may have noticed, it’s technically very similar to Glass.

Whether it will make as much of an impression, we shall see. But if you don’t want to wait for Glass, or simply don’t have enough gold coins in your pocket to purchase Google’s smart glasses, the Vuzix 100 might be a worthy substitute.

For more details simple head over to this link.