Google has today brought forth a significant update for iPhone, iPad and iPod touch users of its social network app: Google+.

Google announced its Plus service, aimed to compete with the likes of Facebook, back in June, and it’s been in and out of news ever since. Google is possibly the only candidate capable of toppling Facebook, and after the "hello, goodbye" of its other iOS social app Photovine, the Big G has focused its efforts on improving the app for iDevice wielding Google+ users.

Amongst the latest updates, the iOS app now brings support for Google Apps, so those taking advantage of custom domains will now be able to use them with Google+. The built-in IM feature now supports typing notifications, so you will be able to see whether the other person is responding to – or indeed ignoring – your interesting conversation.

Those of you keen on browsing the photos of others whilst on-the-go will be pleased to learn that you can now +1 snaps with apparent ease, rendering the app a lot more useful, since you can appreciate a photo without being inadvertently coaxed into the unwanted conversation a comment can bring. 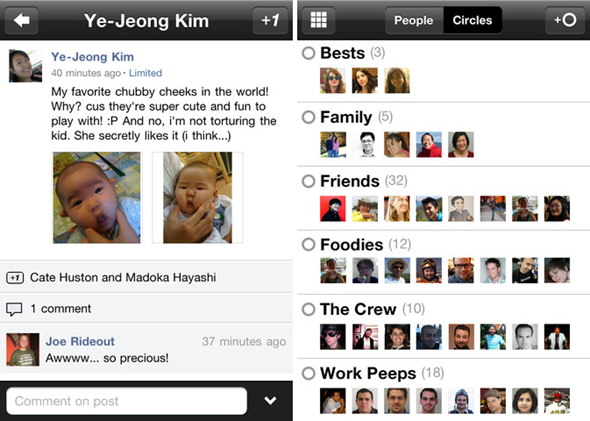 As well as the tidy collection of new features, there are the usual bug fixes, and the performance of this app will certainly go a long way to determining whether Google+ goes the way of Photovine, or whether it indeed does climb the social ladder and make a big impression.

Although still in beta stage, it has amassed 40 million users, who’ve collectively uploaded in excess of 3.4 billion photos. Longevity will be the key, though, as with Google being the world’s number one site for a number of years, a high number of signups can be achieved with relative ease, but keeping them is a different matter. With Facebook bordering the billion mark in terms of active users, there’s a a lot of work, advertising, and app improvements needed before Larry Page’s army be classed as a serious threat.

The new and improved app can be downloaded here, or of course, through the App Store app on your iPhone, iPad or iPod touch.

Leave your thoughts on Google+ – and its updates – on our Facebook fanpage.