After much speculation, Samsung Electronics today have finally confirmed that they are ready to introduce the world to the next-generation Galaxy device. The technology world has been discussing the potential aesthetics and technical specifications of the Samsung Galaxy S IV for quite some time, with the South Korean company confirming that a dedicated event will be held on March 14th to announce the device.

The current-generation Galaxy S III device has been supremely successful in the smartphone market, but the company’s yearly Galaxy release schedule means that the time has come to unveil the S III’s successor. The dedicated event will be held in New York City, which is a location that falls in line with previous comments from Samsung’s JK Shin who has gone on record at the Mobile World Congress conference to state that his company will hold a special event in The Big Apple.

Samsung will be hoping that they can capitalize on the current excitement and popularity that surrounds their intelligent Android powered hardware. Chenny Kim – who operates as a spokeswoman for Samsung Electronics – notes that the announcement of the Galaxy S IV is the first to be held in the United States in the last three years. Previous launches have taken place in European destinations, but it seems that Samsung have bowed under the pressure from US based mobile networks to hold the event in America this time around.

It’s still largely unknown what consumers should expect from the next-generation Galaxy device. Rumor has it that Samsung will be unveiling a device that doesn’t hugely deviate from the form-factor that we have become used to in previous models. We are also expecting to see an improved display with a higher specification camera than found on previous models as well as the inclusion of a quad-core processor to give the device the grunt it will need to reign supreme at the top of the mobile charts.

The teasing images that Samsung have released for the Unpacked event carry the "Ready 4 the show" tagline, with the text pretty much confirming that the company’s marketing department haven’t taken the decision to get creative with the device name. Samsung have an phenomenally popular range of the devices with the Galaxy S Series, so there isn’t a great deal of incentive to step away from the tried and tested. 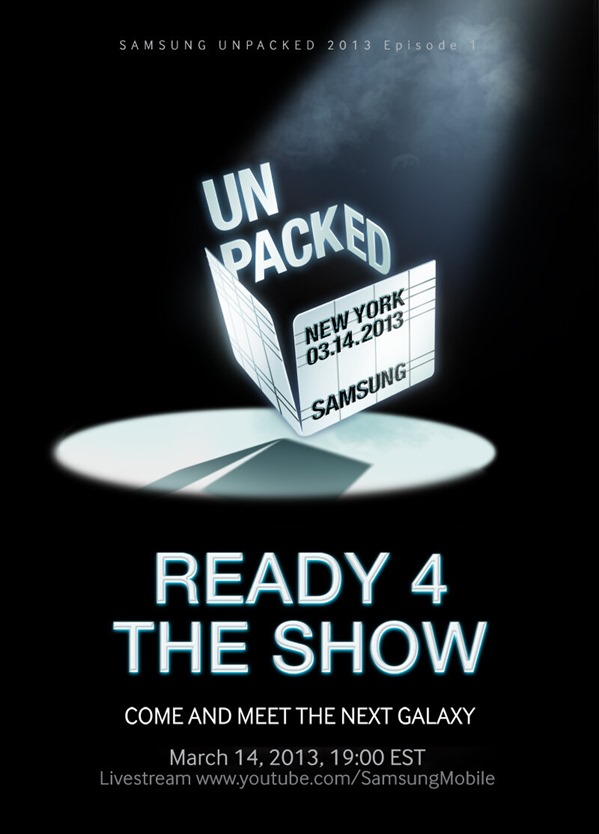