The Windows 8 advertising campaign is like London buses at the minute; you wait patiently to see what Microsoft will launch to promote their new software only to find that four different video-based adverts have leaked at the same time. Only a couple of weeks are left until Windows 8 officially drops for the masses, and while the technology elite know a lot about the gorgeous new OS thanks to pre-release versions and keeping on top of the news, the general public may be non-the-wiser about what Microsoft is bringing with this latest offering.

We can only assume that Microsoft has every intention of actually throwing together a full-blown video-based advertising campaign for Windows 8, although we don’t really have any indication about when this will kick off. In the meantime, the four videos that have emerged at least show that the Redmond-based company have already put some thought into not only promoting the new Windows 8, but also gives us a small glimpse about the features and how to use the software.

Each leaked commercial has a sub one minute running time and focuses on different aspects of what the new operating system will bring to users. Productivity tools for professionals are showcased in one video as well as showing off the available customization options in another. The final two advertisements show off the power of additional apps within Windows 8 and a general overview of what Microsoft has bundled into the software. 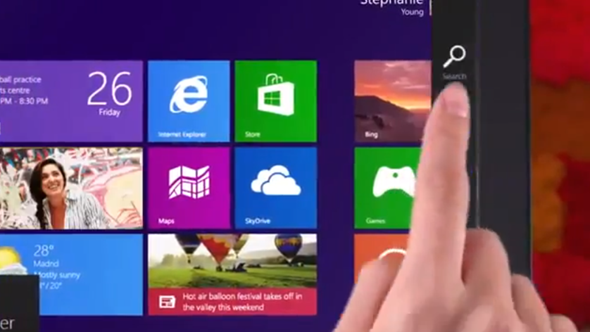 The interesting thing about the videos is that most of the Windows-based action seems to be demonstrated when installed on a handheld tablet, which places a lot of attention on not only the power of the OS, but also on the potential for Windows 8 to compete with the likes of iOS and Android on a touch-capable device. There hasn’t been any official word from Microsoft themselves regarding the legitimacy of these leaked videos, but until we hear otherwise we can assume them to be genuine.

It seems like only yesterday that pre-release versions of Windows 8 were being seeded for developers and hardcore users to test but it won’t be long until the general user can get their hands on it with the official launch schedule for October 26th.