Formula 1 in association with Vodafone has released official F1 timing app for iPhone and some Windows Phones like HTC HD2 which lets you track the progress of each and every driver and their respective teams – from their current position and best lap time to their latest sector times and lap count, all LIVE. You can watch the top drivers in the World, including 7 times champion Michael Schumacher as they compete for the ultimate drivers crown of the year. 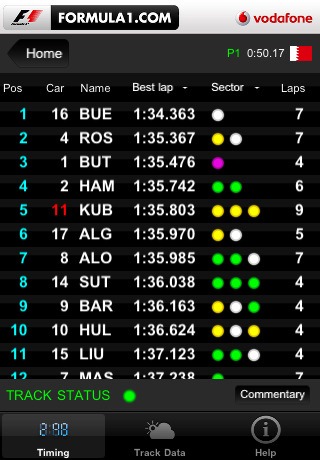 Formula1.com’s free 2010 Application streams real-time data directly from Formula One Management’s Technical Centre at the race track. It displays information supplied to the teams from every session of the Grand Prix weekend, instantly putting you at the heart of the action.

To get this app, simply point your phone to http://mobile.formula1.com to download and install this app for free. iPhone users can alternatively get it from iTunes App Store as well.

This app is also available for a number for Nokia, RIM and Sony Ericsson phones. Full list of supported handsets and platforms can be found here. No Android phone is listed which is kind of strange given the growing popularity of the platform.