Another day, another farce over at Tesla. The company is just hours away from announcing its Model Y crossover vehicle, but it’s currently in the news for all the wrong reasons as one of its former security employees spills the beans on what has been going on inside the electric car company. According to Sean Gouthro, a former security manager at the company’s Nevada Gigafactory, all kinds of things have been afoot.

Gouthro has been speaking to Bloomberg Businessweek about a period in time surrounding Tesla’s firing of Martin Tripp, someone who was speaking to Business Insider about Tesla and has since become an official whistleblower with the Securities and Exchange Commission. According to Gourthro, Tesla was monitoring not only Tripp, but also all of its employees’ personal communications via a device that was installed in the factory.

Gourthro also told of how Tesla was ramping up its staffing numbers so quickly to help meet demand for the Model 3 car that the security team was simply unable to keep order. Drugs were routinely taken in bathrooms and people were apparently caught having sex in unfinished areas of the factory as well. All in all, it sounds like things were pretty lawless over at Tesla, and CEO Elon Musk was more than happy to have his security teams overreach in many ways.

Tesla apparently had run-ins with unions, and Gourthro reports that a former head of security “spied on a union meeting on Musk’s orders and then threatened to tell the world about it.”

There’s much more in the full Bloomberg Businessweek report that makes for interesting reading and, honestly, it’s pretty amazing. Tesla has already claimed that Gourthro’s reports are “untrue and sensationalized,” but then it would, wouldn’t it? 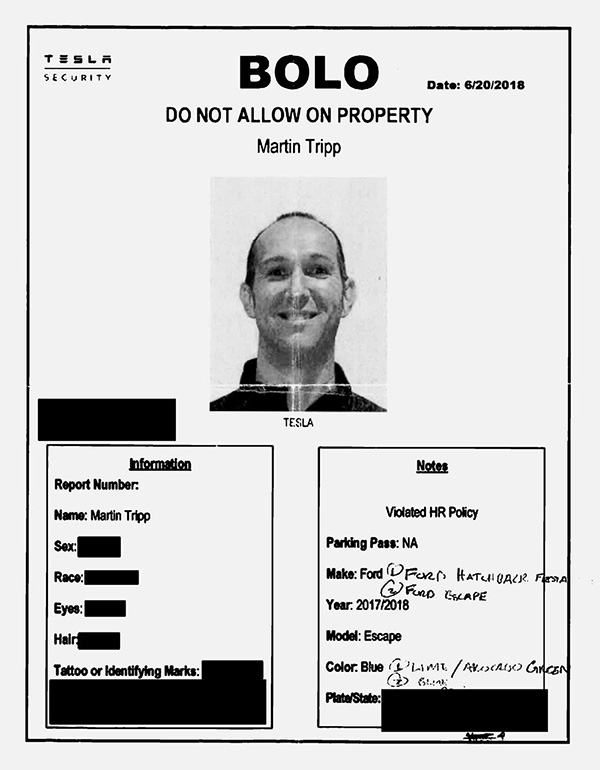