Although Action Man and Barbie tend to take a backseat in favor of electronic gadgets nowadays, there’s still a little place in our nostalgic hearts for the odd action figurine – particularly when it is of legendary Apple co-founder Steve Jobs, who passed away three months ago to pancreatic cancer. 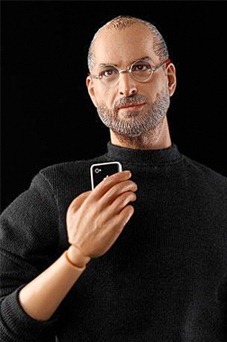 This one comes from, as you may expect, China, and although the fruit company has been dogmatic in removing such items from the black market previously, they just keep coming back, and Chinese outfit InIcons is all set to release this 12-inch tall Jobs action figure some time next month. At $100, it’s surprisingly expensive considering a KIRF iPad 2 can be had for a mere 93 dollars inclusive of a microSD slot, mega-pixel snapper and the Android 2.2 operating system.

The collectable fairly realistic, and comes dressed in Jobs’ trademark not-so-smart casual attire of jeans, a polo neck and trainers as well as those ever-present specs.

It’s extremely unlikely to go on legitimate sale in the Western World since there’s no word on any official authorization from the company Jobs spent the latter part of his career at the helm of. If the doll was to retail in Europe and North America though, purchasers can expect a spare pare of glasses as well as an two sets of backup hands (Overproduction, maybe?). 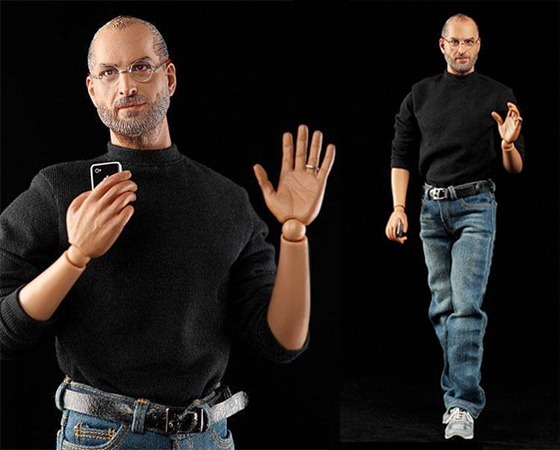 Out of the box, there are also a couple of those white Apple stickers shipped with every iDevice, which will more than likely increase the probability of a takedown notice or lawsuit – a trend which the Cupertino-based company is building a reputation for just now. InIcons has ceased to accept any more pre-orders, which is said to be due to an overload of interest; and with fake Steve Jobs biographies making tens of thousands for bootleggers before the launch of the real thing, it does seem the Chinese market has a huge soft spot for Mr. Jobs.

Back in 2010, Apple stopped M.I.C Gadget from selling similar pocket-sized jobs sculptures, and it would come as no surprise if the fate of the larger, posthumous figure did likewise. Despite appealing to the Cupertino company’s compassionate side by dedicating it to "to the Genius, Great Inventor and Visionary: Steve Jobs", making a quick illegitimate buck from him does indeed go against everything he stood for.

Speaking of standing, Hungarian Capital Budapest has also seen a model of Jobs recently – a large bronze one paid for by a company which Jobs sponsored when it was taking its baby steps into the business world. Now that’s what we call a tribute!