China is infamous for exporting many a fake electronic product. As Apple’s iDevices invariably generate the lion’s share of the media’s attention, so do the knock-offs which constantly spring up. You can generally find fake iPhones and iPods at a fraction of the price from the likes of eBay, most of which are poor replicas of the real deal. However every once in a while, a decent one pops up which raises a few eyebrows in the tech community.

The bootleggers have really pulled the rabbit out of the hat with a worthy copycat iPad. It comes in a pure white shell which certainly looks the part: 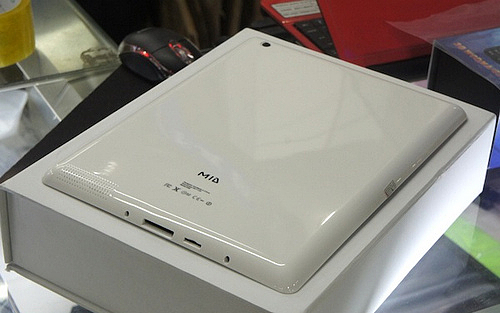 Okay, okay. So it has a plastic back – a feature we very much hope Apple killed off after the iPhone 3GS by since bringing us the elegantly-finished iPhone 4 and iPad 2 which make them feel like a decent bit of kit. But it does have something most iDevice users crave, a microSD card slot. The ability to boost the memory without paying through the nose is something we would like to see, but aren’t holding our breath for. With Apple charging upward of $100 per memory upgrade, and iDevices still selling like hotcakes, it would be bad business to do so.

The specs are also far from what you would get from a proper iPad. It has an 800MHz VIA 8650 processor with 256mb memory is a far cry from the dual-core A5 chip running in a genuine second-gen iPad. It runs on Android 2.2, includes 4GB of storage a 9.7-inch resistive touchscreen (800 X 600) Wi-Fi, 1.3 megapixel rear camera, a 2800mAh battery and as aforementioned, that microSD slot. It measures in at 205 x 157 x 9.9 mm, and weighs 479 g, so despite being a tad thicker than, it is actually lighter than it’s genuine counterpart. 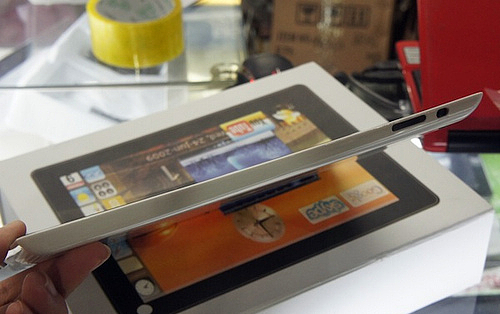 The cost? One of these will set you back a mere $93, at Chinese company Shenzhen Huaqiangbei which is an absolute bargain and definitely worth checking out at such a low-risk price – more out of curiosity than as a genuine iPad replacement. You certainly wouldn’t find anything like that for the price in the Western World!

But we at Redmond Pie always recommend that you go for the real deal instead of buying knock offs. The reason being; you get a much more reliable product along with a handsome amount of support from the company itself. Who knows when this knock off would die out on you, just think about it.