When it comes to piracy, the world of game consoles is no stranger to the illegal downloading of intellectual property, but over the years, it has become less of a problem for those making games.

With consoles now always connected to the internet and system as well as game updates continuously being released, those who seek to jailbreak consoles from the likes of Microsoft and Sony find themselves in a constant cat and mouse battle, trying to stay one step ahead of those tasked with keeping consoles secure.

The PS4 and Xbox One have largely been successful in this regard, but now, some newly cracked PS4 games have appeared for download online. Release group KOTF (Knights of the Fallen) has made Grand Theft Auto V, Far Cry 4, and Assassin’s Creed IV available for download from the usual sources of torrents, and while they are huge – 50 x 900MB in some cases – that is not the main reason we simply do not see anyone taking the time to download them.

For starters, it would appear that anyone wanting to play any of these games will need to have a PS4 running an extremely old version of its firmware – v1.76 – which was released way back in August 2014.

Even if you do have one of those laying around, there are yet more hoops to jump through. With newer games also forcing software updates before they will work, it’s likely you won’t be able to play anything released in the last few years. 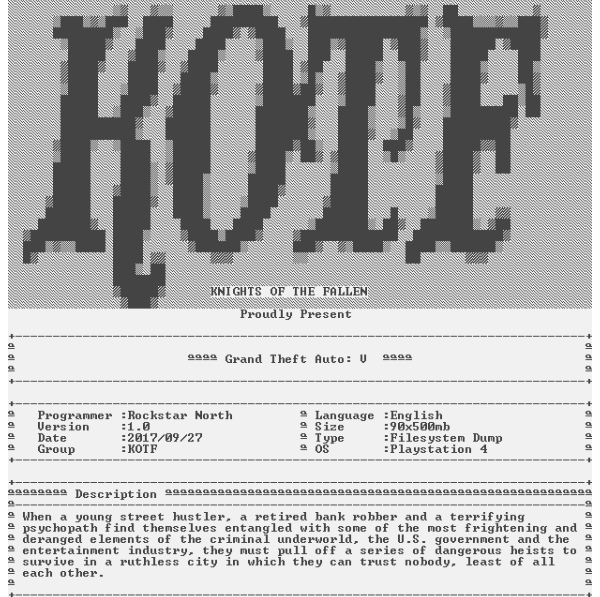 The upshot of all this is that yes, some PS4 games have been made available sans encryption, but that does not tell the whole story at all. It’s fair to say that we don’t expect an influx of PS4 pirating any time soon, that’s for sure.