Firefox Seen Running on Nexus One

After releasing the portable version of Firefox for Windows phones, Mozilla team is now all set to release the ambitious Firefox for mobile project called Fennec for Android phones. According to a member of the Fennec team, the project port of Fennec for Android is coming on nicely and it shouldn’t be too long before you can try it on your favorite Android based handset. 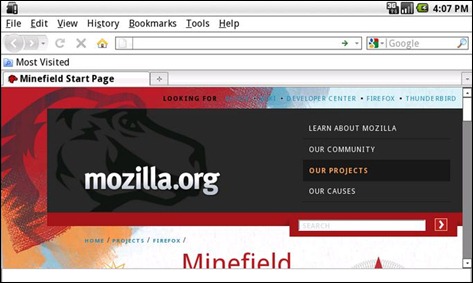 Here is what they have to say about it.

You’ll note that this is the full Firefox interface, and not the Fennec/Firefox Mobile UI; we’re testing with the full interface because it’s significantly more complex than the mobile UI and stresses Gecko much more.  So, if the full UI works, then Fennec should work fine as well.  Given the interest in Android on netbook and tablet devices, an updated version of the full Firefox UI might find a home on some of these.  Android has been pretty great to work with so far; it’s a bit unusual platform for us due to its Java core, but with the NDK we’re able to bridge things together without many problems.

We’re still a ways  to go before any kind of usable alpha release, but we’re certainly one step closer.  We’ll also be able to accelerate our progress now that we have some of the basic scaffolding in place.  I know I’m looking forward to running Fennec on my Droid, and there are tons of Android devices coming out that should be great platforms for Fennec.

Here is how it currently looks, running on the flagship Android phone – the Google Nexus One. 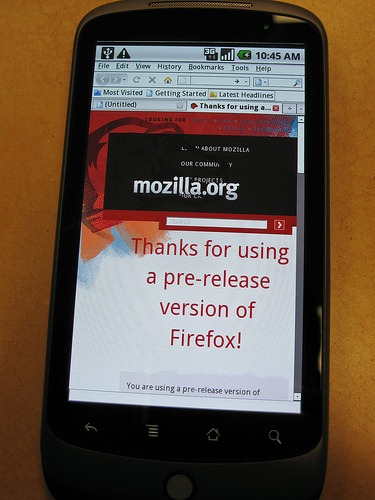 Stay tuned as we’ll let you know whenever the Alpha version of Fennec is released for Android phones. [via The Next Web]