It seems that Facebook is giving iOS plenty of focus of late, and after seemingly falling out with the platform following an unusually slow update cycle, the social network is now updating its iPhone and iPad apps at a much more useful cadence.

The latest update brings Facebook for iOS up to version number 6.6, and this new version sees the iOS app become more like the desktop web site after Facebook brought some rather useful features to the mobile platform.

The more useful as far as we are concerned is the ability to edit Facebook comments on iOS. Being able to correct typos or completely redact what you previously said is now something that is possible on iOS, giving the app more parity with its big brother.

Fans of comments will also like the added ability to add images to comments on Facebook posts, which again is something that those using the web interface have been able to do previously. With the Facebook for iOS app previously lagging behind the web version, it’s great to see it getting some love these days. It’s amazing what a big new operating system release and new hardware will do to get companies interested again.

• Edit your posts and comments, and tap to see all your changes
• Add a photo when you comment
• Express yourself with icons when you post to someone’s timeline (English only)
• Get to privacy shortcuts by tapping the lock by your name in the main menu
• Bug fixes 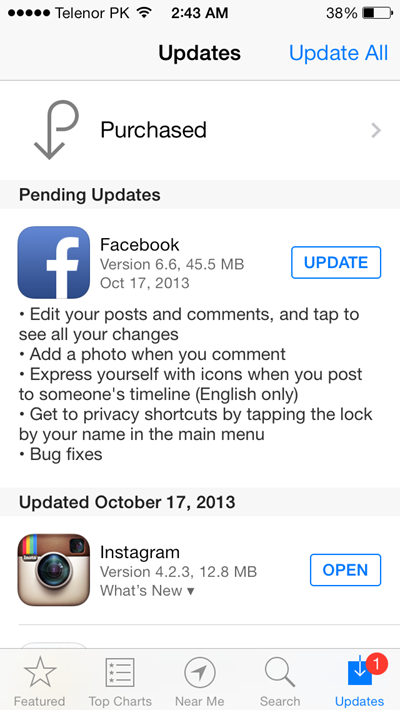 Facebook was one of the first to get a refreshed app out for iOS 7, and while Twitter was also amongst the first companies to embrace the new operating system, Facebook’s ability to lag behind the times on Apple’s mobile systems makes its new lease of updating life much more remarkable.

Let’s hope that it continues.