Facebook is always looking to improve and update its market-leading social network, and as part of that, it looks as though the ability to add images into comments is forthcoming. Users of the world’s foremost social network can already to as such with their status updates, but this new update, which will initially roll out on the Web, will allow images to be added to comments as well.

Such a move will be a certain win for users of troll sites such as 9GAG, many of whom love to answer questions with a silly picture perfectly fitting of a response. But jokes aside, this is certainly a move that will enhance overall functionality, and although it will only be available to those using the Web version initially, you can be almost certain that an update to the apps for the respective platforms will not follow too far behind.

This would-be feature is based upon a screenshot posted by Dan Leveille, Product Marketing Manager over at devianART, but apparently, Facebook has confirmed this feature is in the pipeline having spoken to multiple sources.

The new feature will begin rolling out today, the eve of the next "big idea" event that the Menlo Park-based outfit has planned for tomorrow, and although this perhaps doesn’t go down as a major implementation, it does provide a little filler for Mark Zuckerberg’s latest keynote speech; something he’s clearly been improving on from those early days of delivering droid-esque presentations.

We’ve already learned of Facebook’s intention to essentially quash Vine by bringing a video feature to Instagram, and with hashtagging also having made its way to Facebook in the past couple of days, we’re still left wondering exactly what form the next "big idea" will actually take. If you haven’t tried it yet, Facebook Hashtags is a great way to find your interests. 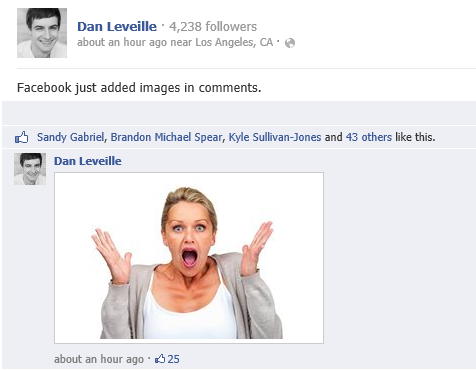 It could merely be a cluster of small announcements culminating to something big, and these new features could be a part of that. Then again, with the moves Facebook has been making, I wouldn’t be surprised if the company is planning on bringing something of significance to the table.

Whatever the case may be, we will be tracking closely the movements of Facebook throughout the next 24 hours, so stay tuned!

Now I’m going to wait and see when the comment photos are going to roll out for me.