For a long time, Facebook was always thought of as a web-based company that didn’t put a lot of importance on users who prefer to access their services through mobile devices. The official Facebook app was built around cross-platform technologies making it notoriously slow, unpredictable and unstable, and their mobile website didn’t really make things much better. That focus started to shift with the acquisition of Instagram, followed by the updating of their mobile apps into native languages as well as the release of standalone apps such as Messenger, Pages, Poke and Camera. For the first time, we can now actually get an insight into Facebook’s mobile users and devices and firmware that they actually use, thanks to some meticulous data collection from Benedict Evans of Enders Analysis.

Evans himself admits that a portion of his research and data is incorrect due to incorrect calculations relating to the Facebook mobile website, and although Facebook has officially declined to make any comment about the rest of the numbers, it seems that they are accurate. Back in 2011 when Facebook actually published usage stats, the Facebook for Android app had amassed 66 million users who were active on a monthly basis. The official Facebook for iPhone app had 91 million monthly active users during the same period. 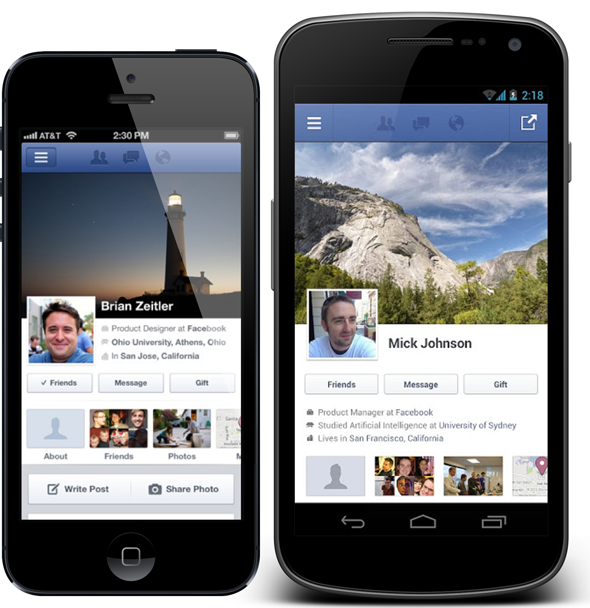 Fast forward 12 months and it seems things have changed quite significantly. In November of last year, the Android Facebook app saw 192.8 million monthly active users logging in and browsing Facebook data, where as the iPhone variant was lagging behind with 147.2 million users who were active from a month-to-month basis. The soar in Android users logging into the app each month saw Facebook’s total mobile users rise to a staggering 604 million users by the end of the third quarter of last year. That figure represents more than 50% of their total user base.

Although Android users outnumber those accessing Facebook mobile through an iPhone, the figures also show that the number of users accessing the network through an iPad rose from a couple of million to 48 million in 12 months from September 2011. The statistics also suggest that Facebook’s philosophies of putting varying features of their service into different apps is paying off, with apps like Messenger having 113.4 million active users by the end of November 2012.

It’s unsure what the future of Facebook will be on mobile, but considering the apps released to date have proved to be relatively successful for the company, it’s likely that we could see additional features added to the existing portfolio or perhaps a number of new dedicated apps released by the company during 2013.