Mark Zuckerberg, the Founder and CEO of Facebook is not at all pleased by his brand new iPhone (not iPhone 4) which he only got last week. He posted about his frustrations with the device on his Facebook wall that within a week of getting the device, he has already got himself a bunch of chargers and a landline to move his Apple device from one place to other, and to actually make phone calls. Yes, he was clearly complaining about the battery life and phone calling quality. 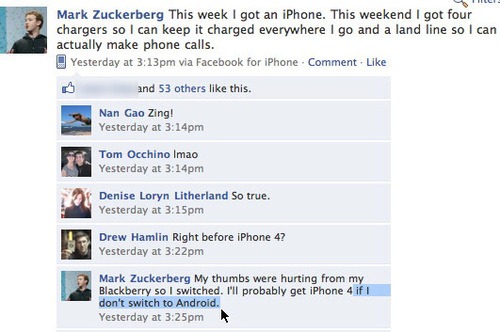 Digging down the comments, Zuckerberg replied to his fans that he made the switch from BlackBerry to iPhone because he wanted softness of a touchscreen. The physical keyboard on RIMs BlackBerry was hurting his fingers and so he made the switch. He also said that he will get the new iPhone 4 and see if that solves the problems before switching to Android.

AT&T’s poor reception and drop calls problem is nothing new to be heard off, but poor battery life? Is the battery on the current iPhone really as that bad as Facebook’s Chief making it out to be? [via Gawker]