Ever Imagined The Whole Internet As A Galaxy Of Its Own? You Might Want To Check This Out!

The Internet is a wonderful place. Many of us get lost in cyberspace on frequent occasions whether we’re wolfing through YouTube, researching something on Wikipedia, or allowing Google to answer all of our burning questions. Many have attempted to visualize the Internet in the past, but Russian programmer Ruslan Ekineev has created an out-of-this-world depiction, which he calls The Internet Map, and it’s certainly something of a masterpiece.

It looks like a Galaxy of stars and planets, and as you can see, the most frequented sites are represented by the large blobs. Among those are Facebook, Google, Yahoo, Bing and YouTube, while other somewhat significant sites look nothing more than a flick of paint. The aforementioned are certainly central cogs in the grand scheme of the Internet, but this illustration really puts things into perspective. 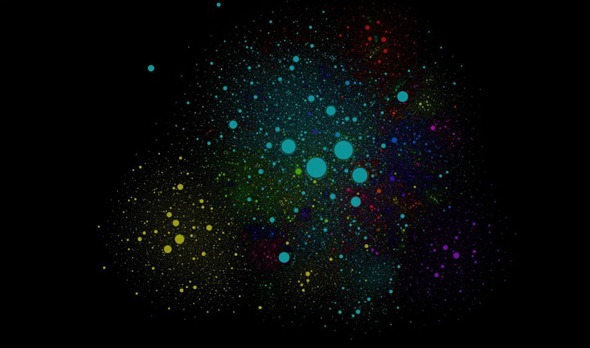 The size of each planet has been calculated by its relative traffic by the end of 2011, while their locations are determined by sites sharing overlapping links. Colors signify the 196 different countries making up the vast mixture of information we all rely heavily upon, and it’s just amazing how few sites of many hundreds of thousands have such a significant influence on our lives.

Facebook now has in excess of 900 million active users, which is an incredible achievement, and when a web user is looking to find something out, they invariably consult Google. Despite the rise of sites such as Vimeo, YouTube rules the roost when it comes to online streaming content, and given the viral site is also owned by Google, it’s fair to say the Big G has a very significant stronghold on the content we see and use. 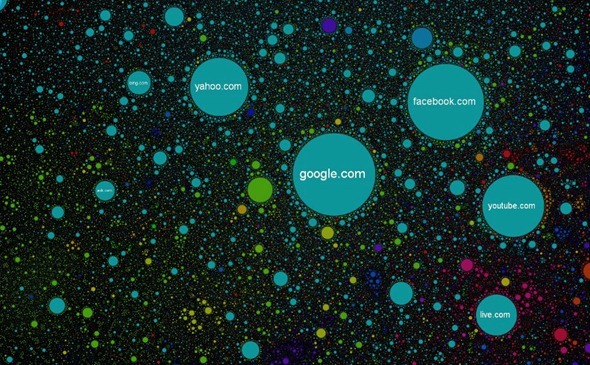 The Internet Map hasn’t thrown up any surprises, but I’m still in awe of the visual representation. I cannot find Redmond Pie on the map just yet, but I can’t say I’ve had the time to study the chart in great detail. You can view the chart yourself by heading over to this link: http://internet-map.net/

Can you find us on the map? What do you make of Ekineev’s effort in general? Should we be concerned about Google’s heavy influence? Please share your thoughts with us via the usual mediums below, we always love hearing from you!