Here’s how you can enable 10x zoom for video recording mode in the stock iPhone Camera app on iOS 10. No jailbreak is required for this to work.

Camera functionality in Apple’s iPhone range has progressed leaps and bounds in recent years. We can attribute that to the advancements made in camera modules, as well as the importance placed on ensuring that iOS has some wonderful inclusions in this area to complement the hardware. 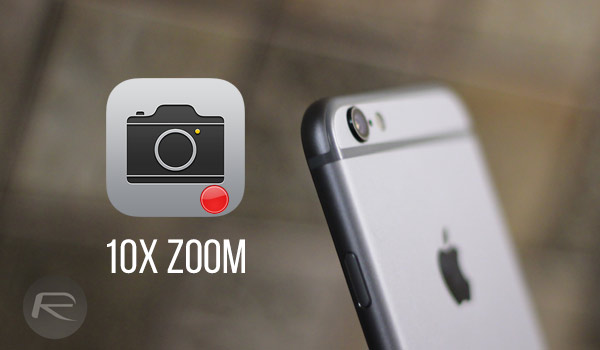 Some users feel that certain areas may have limitations, such as the amount of zoom possible, which is 6x for video compared to 10x for photo, when capturing a video. This little trick will show you how to bypass those limitations by taking advantage of a bug in iOS 10. If you are ready to learn how you can trick the stock iOS 10 Camera app into allowing you to zoom up to ten times whilst recording a video, then follow the relatively simple steps below. It can be a little fiddly at times, but it’s relatively simple way of getting up to 40% more zoom without having to use a third-party app.

Step 1: This bit probably won’t come as any great surprise, but you are going to need to be in the Camera app to begin. Launch the Camera app just like you would with any other app.

Step 2: Make sure the camera mode is set to capturing a standard photo, rather than a video. Using the standard zooming interface method zoom right in until you are at 9x digital zoom but do NOT take your finger off the display.

Step 3: Tap on the display with another finger to draw focus, and then instantly swipe into Video recording mode whilst still keeping the zoom finger on the display.

Step 4: When the Video Recording Mode activates, you will be able to carry on the zoom process and actually hit 10x digital zoom on the video mode.

Of course, once you have captured the video, saved it, and have exit the Camera app, you will need to go through the whole process again, which can be fiddly and unreliable at times. This doesn’t physically unlock some kind of hidden 10x digital zoom mode when recording video, but rather offers a way to trick the Camera app into allowing a user to zoom in that far by taking advantage of a bug.

Thanks Riad Zoabi‏ for the hat tip!