It may have been conspicuous by its absence at yesterday’s keynote, but Google Glass is still the hottest property in personal technology right now. You only have to flick through any social media site and you’ll come across someone either wearing Glass, or at the very least, talking about it.

Google may have kept Glass out of its big keynote at the beginning of I/O yesterday, but it did speak about it during a panel later in the evening. There, Project Glass Staff Hardware Engineer Jean Wang spoke about the process the company went through in trying to build something so unique as Google Glass. And trust us, the process is quite intriguing.

During the chat, Jean Wang presented a slide which showed some of the iterations of Google Glass, right from initial prototyping to the final product that a lucky few are now walking around wearing. And some, who are taking pictures of themselves wearing Glass during a shower.

Initially, Glass consisted of a smartphone attached to the side of someone’s specs. Not really ideal, and certainly not something that would create the worldwide buzz that Glass has gone on to do. But it was a start, and sometimes that’s all you need to spark a great idea.

Early prototypes included a mini projector that pushed light into the eyes of the device’s wearer, long before the custom parts were made that meant the mini display could be created that we now know as fundamentally Glass. An overall change in size then followed, and finally Google added a spot of polish by redesigning the frame that Glass sits upon, making the whole thing look much more pleasing to the eye, and in the process making it more likely people would actually wear it in public without embarrassing themselves! 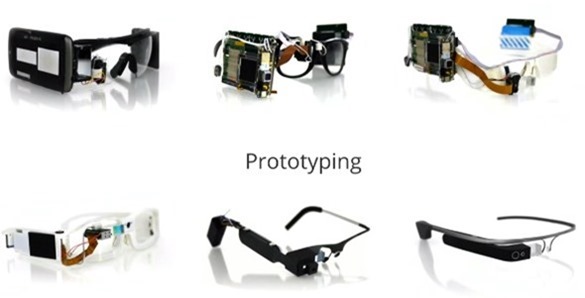 Of course, we will have to wait and see whether normal people will be happy to wear Glass, or whether the likes of Robert Scoble (the shower guy mentioned above) are just extrovert enough to walk around with a camera and small computer strapped to their head. We suspect the truth lies somewhere in the middle, and we can’t wait to have the opportunity to find out how we feel about it first hand.

We can haz Google Glass nao?