A home surveillance system used to be a high-cost commodity that was both difficult and expensive for your average individual to install. But nowadays, one can purchase a camera relatively cheaply, and the process of setting up is not particularly cumbersome either. Dropcam, a company that has been helping folks keep an eye on their houses with neat smartphone integration, mightn’t necessarily be the first choice of somebody looking to protect themselves from intruders, but some newly-added hardware suggests that the Dropcam team is looking to move its product toward this particular niche.

The Dropcam always had the potential to break into the anti break-in market, but hitherto, has been something of a token gesture in the battle versus unwanted intruders. Sure, it can record suspicious goings-on, and in such events, throw you a notification for good measure, but thanks to the introduction of Dropcam Tabs, it can now do a whole lot more. 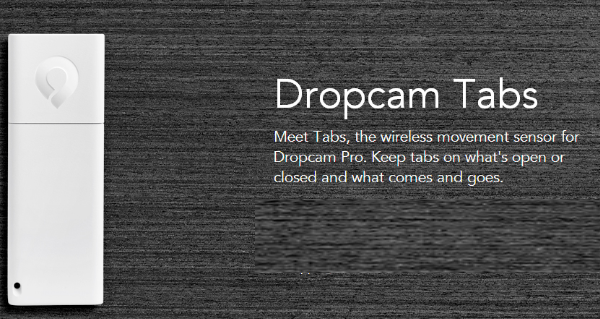 Tabs can be placed onto objects obscured from Dropcam’s watchful eye, like doors and windows, and when they’re moved — i.e., somebody’s opening a window in order to access your house — the Tabs send a signal to the Dropcam via Bluetooth LE. 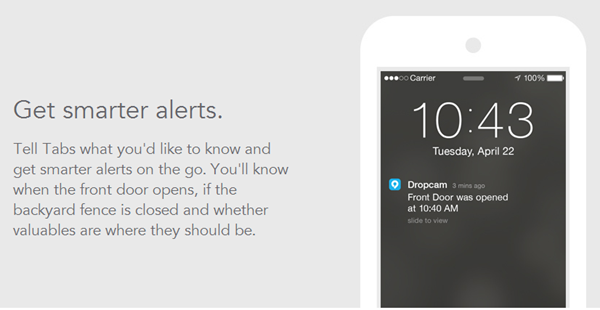 The camera itself is now able to differentiate between human movements and general shuffling around of, say, a house pet, which should prevent you from the adrenaline rush of a false-positive.

Tabs are compact and cost just $29, although if you’re in a house with, shall we say, a lot of doors, you might end up purchasing quite a few. They’ve a decent range of 100 feet, though, so should be able to cover most houses provided that the Dropcam itself is placed fairly centrally.

The clinching aspect of the Tabs is that they’re also weatherproof, so can monitor a shed, garage, or outbuilding should unauthorized access occur.

Sure, the Dropcam — even with the Tabs — won’t prevent you from getting burgled like a more traditional deterrent system would. But nevertheless, it’s a decent tool to have in the inventory, and with HD recording, you’ll at least be able to spot the criminal at an identity parade.

If you wish to take advantage of Tabs, you’ll have to pick up the newest version of Dropcam, although the human detection features are available to owners of all variants tethered to one of the company’s subscription packages.

For more information on Dropcam Tabs, which will begin shipping in the summer, check out the official website here.