Apple Music has been off to a great start for those who signed up following its launch on June 30th, and while the ability to stream music is the service’s marquee feature, it’s the Beats 1 Internet radio station that is currently getting a lot of attention. Fronted by popular DJs such as ex-BBC man Zane Lowe, the 24-hour station is also set to feature shows presented by some of the music industry’s biggest names.

One of those, Dr. Dre, will see his new show The Pharmacy air today, July 4th at 3pm PST, Apple has announced. After today, the show will settle into a weekly berth, running at the same time each week. According to Apple, Dre’s shows will last an hour apiece and will be co-hosted by Eddie Francis while featuring such recording artists as Wyann Vaughn and DJ Pooh. Music from DJ Jus Incredible will also be putting in an appearance, we are told. 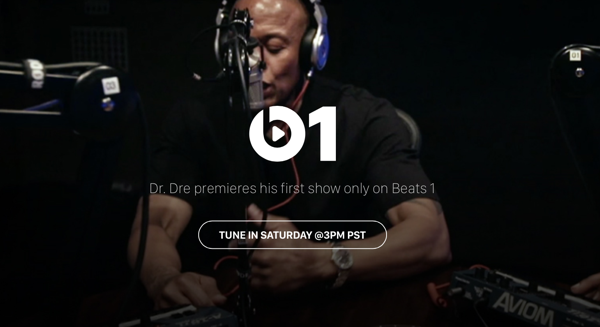 As part of its current media push, Apple has also shown off a new video that promotes Eminem’s new single, Phenomenal. Posting a teaser video to Instagram, the full 7-minute video features names like John Malkovich while Apple products also make an appearance. Both the iPhone 6 and Apple Watch get some air time, with Apple keen to associate the products with its new music venture.

Right now Apple is using its clout in the music industry to batter its new streaming competition into submission, with few others able to call on the big names that Apple can. The Beats 1 Internet radio station is another string to Apple Music’s bow, and one that the likes of Spotify cannot yet compete with.

Apple Music costs $9.99 per month and is available as part of a three-month trial, also. If you haven’t given Apple Music a shot just yet on your iOS device, then you can take the service for spin on your desktop as well, which is part of the iTunes 12.2 update that was pushed out the same day Apple Music went live around the globe.