It’s out now and it’s official, Mac OS X 10.6.3 was released today by Apple. It is a very crucial update and it implements hundreds of fixes since it’s last update, 10.6.2 (November 2009). You can get the update from Snow Leopard’s Software Update, or directly from the Software Downloads page here. 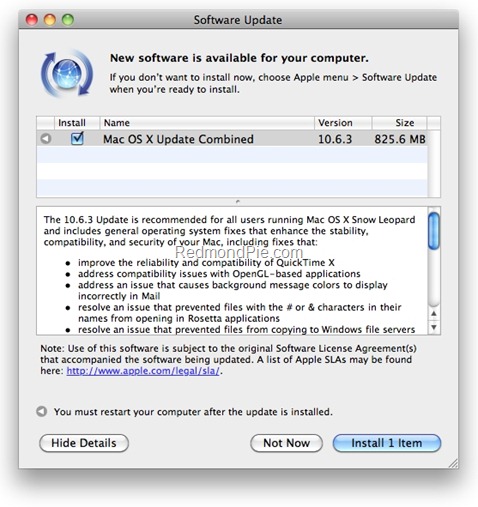 10.6.3 is a recommended update, it enhances the overall stability and compatibility of you Mac. Some of the fixes which it implements are as follows; Improves reliability and compatibility of QuickTime X, Resolves an issue which doesn’t let files to be copied onto a Windows file server, Increased reliability of third party USB devices. The full official change log is as follows:

The 10.6.3 Update is recommended for all users running Mac OS X Snow Leopard and includes general operating system fixes that enhance the stability, compatibility, and security of your Mac, including fixes that:
– improve the reliability and compatibility of QuickTime X
– address compatibility issues with OpenGL-based applications
– address an issue that causes background message colors to display incorrectly in Mail
– resolve an issue that prevented files with the # or & characters in their names from opening in Rosetta applications
– resolve an issue that prevented files from copying to Windows file servers
– improve performance of Logic Pro 9 and Main Stage 2 when running in 64-bit mode
– improve sleep and wake reliability when using Bonjour wake on demand
– address a color issue in iMovie with HD content
– improve printing reliability
– resolve issues with recurring events in iCal when connected to an Exchange server
– improve the reliability of 3rd party USB input devices
– fix glowing, stuck, or dark pixels when viewing video from the iMac (Late 2009) built-in iSight camera