Apple just released a point update to iTunes for both Windows and Mac users. Merely a bug fix and performance enhancement release, iTunes 10.4.1 addresses some critical problems that have been haunting users ever since the iTunes 10.4 release.

An incredibly painful issue that has been present since the release of iTunes 10.4 was the inability to easily assign custom artwork to music files, often used for less well-known albums that might not be available on the iTunes store. Other issues were also fixed, such as one that made the program rather difficult to use with some third-party keyboards due to the inconsistent placement of media keys. 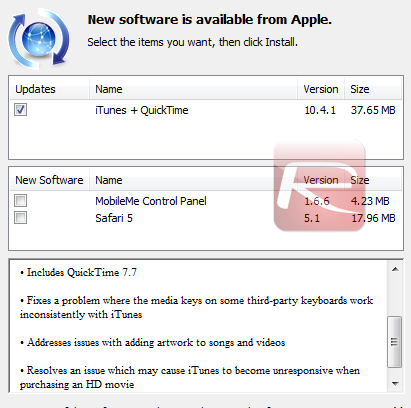 This small update comes just over a month after iTunes 10.4 was released. Said release included several performance and stability enhancements to both the Windows and Mac versions of the program, but focused specifically on the latter, where it added support for the newly-released OS X Lion by integrating with its native features such as full-screen mode and fluid scrolling, as well as slightly adjusting the user interface. iTunes 10.4 was also the first release of the software to be a full 64-bit Cocoa app on the Mac, which allowed for better performance when carrying out resource-heavy tasks, such as transcoding songs.

In order to install this new update, simply fire up the Software Update app on either Windows or OS X and you should be notified of the iTunes 10.4.1 update, simply hit the “Install” button and the rest is automated. The update process itself should take just a few minutes and includes no visual changes to Apple’s well-known jukebox software. All users should download this update as soon as possible.

Check out the Windows and Mac changelog below: