The introduction of the GM version, which represents the final release before the software hits public devices, follows on from the iOS 9 beta 5 seed released back at the beginning of August. There have been a lot of discussion about whether or not we would see a sixth seed of iOS 9 in its pre-release form, but today’s Golden Master availability has put that rumor to rest. The download links are live and ready, and we have you covered right here. 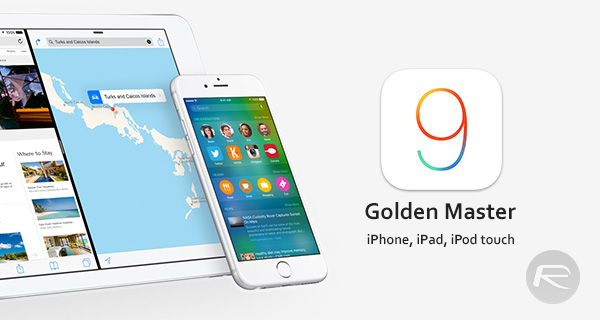 This will likely be the build which will be released to public next week on September 16, ahead of iPhone 6s and iPhone 6s Plus launch.

Rather than entirely reinventing the wheel, the release of iOS 9 concentrates predominantly on stabilizing the functionality introduced with iOS 8, but also brings with it a number of evolutionary feature upgrades that will definitely appeal to iPhone, iPad and iPod touch owners.

Apple has also released iOS 9.1 beta 1 today, which will likely ship when the new iPad Pro ships next month.

So what exactly do those installing today’s GM copy of iOS 9 have to look forward to? Apple is attempting to market iOS 9 as providing “a better experience with every touch”. Newly implemented multitasking features for iPad users will really help individuals get the most out of Apple’s latest tablet hardware. There’s also dramatic improvements to Siri, including Proactive Assistant, that allows the company’s digital assistant to do more than ever before. Perhaps most importantly, Apple has focused a lot of attention and resources towards stabilizing the foundation of the platform, the result of which, is a faster more reliable experience that increases battery life and security. For a full list of features on what’s new in iOS 9, check out our post: Apple iOS 9 Announced: Features, Release Date And More. You can also check out our hands-on with iOS 9 here: iOS 9 Beta Features: Hands-On Video Walkthrough.

As always, we’ll be digging into the Golden Master seed and iOS 9.1 beta 1 to see if there’s anything that’s new and noteworthy with this particular release. Developers should also know that a new Xcode 7 GM is also being seeded right now, and should reflect the final changes before it is officially launched via the App Store.

We’ll keep you informed whenever the final iOS 9 release becomes available on the 16th of September, so stay tuned to our coverage.