Download Android 2.2.1 for Nexus One and Update it Manually [How-to Guide]

Google’s very own smartphone and current developer device – the Nexus One – is now receiving an OTA update for Android 2.2.1 (Build FRG83). It is unclear at the moment what the update does, but it is safe to say that it probably fixes bugs and improves general stability. It does, however, remove the ability to perform one-click rooting. 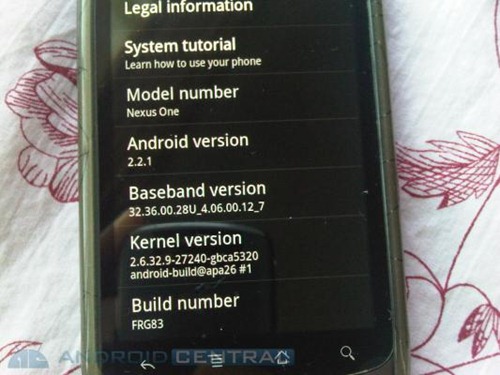 This time, Google’s own flagship device, the Nexus One, receives an update to its OS. Here is the information on the update, courtesy of Devastatin from the XDA forums:

Now you can either wait for the OTA update to arrive itself, or you can be a geek and install it manually by following the steps mentioned below:

Step 2: Rename the file to “update.zip” and move it to your Nexus One’s microSD card.

Step 4: Keep the “Volume Down” button pressed and turn on the phone. Scroll down to recovery and press the power button.

Step 5: When you see a triangle with an exclamation mark, simultaneously press the Power and Volume Down buttons. A menu will appear, select Apply sdcard:update.zip

Step 6: Now the screen will say install from sdcard complete. Select reboot system now and leave the phone for a while. It will take considerable time rebooting and updating to 2.2.1 firmware.