Rumor has it that the iPhone 6 will benefit from – among other things – a robust, Sapphire glass display. With the shield in place, the days of shattered displays and slivers of glass catching our fingers as we swipe and tap around the cracks should be long gone, and if there was ever any doubt as to the credentials of this material, the video seen below dispels them with aplomb. The clip, which you can see after the break, shows how an iPhone 5 is able to withstand a fair amount of punishment from a concrete block thanks to a Sapphire Crystal Screen Protector by Aero-Gear.

Even though Apple has worked to ensure the display of each iOS device has become tougher through the generations, the issue of shattering is still relatively commonplace. Most of us have had to deal with a cracked screen at one time or another, and with Apple charging a great deal in order to patch them back up, many have had to turn to third-party repair stores, which can affect warranty. 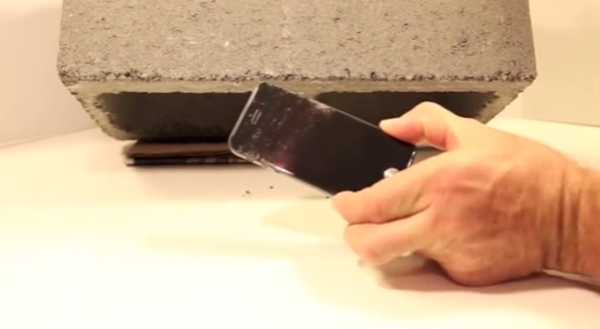 Aero-Gear’s demo video sees the iPhone 5 scraped extensively with the block, but if anything, the concrete actually comes off worse. Particles from the rather large concrete piece are left atop the Sapphire Crystal Screen Protector, but once the demonstrator runs over the display with a cloth, it looks as good as new once again.

Of course, Sapphire Crystal won’t be foolproof, and so will still pick up scratches and cracks here and there in extreme cases. But the number of people suffering the repercussions of innocuously dropping their devices should be greatly reduced, and with plenty of other exciting features headed to iPhone later on this year, we’re already rather excited to see what Apple has in store.

Along with the Sapphire display, which is said to be in trial production over at Foxconn, it has also been suggested that we could be seeing two new iPhones later this year, each with larger displays. Further to this, the iPhone 5s will reportedly stay as a third option, while the 5c, which only arrived in September, will be pulled.

Whether any of this is true remains to be seen, but as we await some solid evidence, do check out the benefits of sapphire crystal in the Aero-Gear clip below: