If you’ve ever been after a performant Android tablet with a ridiculously low price-tag, then the chances are that you’ve probably looked at Amazon’s 7-inch Fire tablet. When it was originally launched, no-one could really believe that the behemoth retailer was selling it for just $50 – or a multipack of six for $250 – meaning that it quickly became an extremely popular budget-tablet for those who didn’t need the power of an iPad or higher-end Android slate.

Now, it seems that Amazon is trying to actually give the Fire tablet away by reducing the price by an additional 20-percent, meaning it now ships for just $39.99. 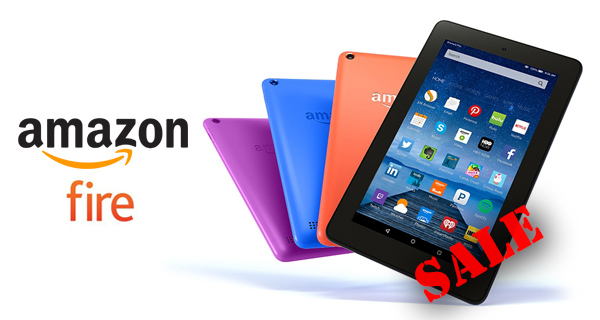 Spending $50 on one of Amazon’s FireOS-powered tablets was undeniably an excellent investment. Having that now slashed down to just $39.99 makes it a total bargain. For that financial outlay you’d be getting a 7-inch tablet that is powered by Amazon’s own FireOS – which is essentially just a custom version of the open-source Android platform – along with a fairly decent specification given the price. The tablet itself has a gorgeous 7-inch IPS display with a 1024-by-600 pixel resolution. There’s also an integrated 1.3GHz quad-core processor that works in conjunction with FireOS to get the best possible performance out of the tablet.

Consumers can purchase the tablet in either 8GB or 16GB configurations, although the lowest price is only available on the lower capacity version. The storage can also be expanded up to 128GB through the use of a microSD card. Oh and there’s a decent VGA front-facing camera for video calls, and a nice little 2MP rear-facing camera that can record videos in 720p.

There’s also a color to suit every mood too, with Amazon recently announcing an upgrade to the tablet which brings in Black, Magenta, Blue, and the surprisingly lovely looking Tangerine colors to the tablet.

Amazon’s Fire tablet may not be your first choice for a tablet if given the option, but with this price reduction, it’s very hard to ignore it. At $39.99, you can now have one for every family member if you want.