Chances are, if you’re an iPhone owner, then you will have a device that’s full of apps downloaded from the App Store. You may download and try out whatever is featured on a weekly basis by Apple, or you may have a set of apps that you use on a daily basis for messaging and checking social media or news. You may frequently interact with multiple third-party apps on a regular basis, but it’s also fair to say that Apple’s stock Messages app will be one of the most commonly used apps on most devices. If that applies to you, then a app named Other could be an excellent little messaging companion for sending canned messages.

If you’re a little bit confused about the purpose of Other, or what it is actually used for, then think of it as a companion app to the iOS Messages app that can quickly launch pre-defined messages. The interface within Other allows users to set up pre-defined message content, and then assign that content to an individual contact on the device. Of course, that means that the user needs to provide permission for the app to access any contacts saved on the device. With that said, if you’ve been looking for an app of this nature, then providing that permission won’t be an issue. 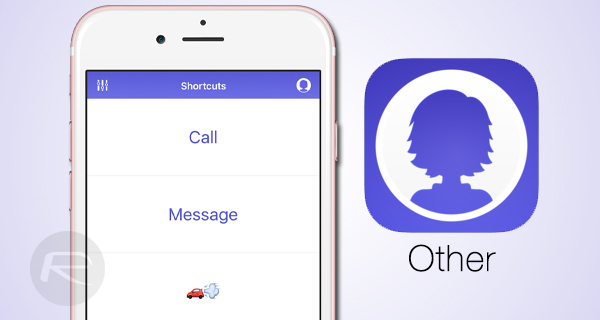 For a single contact, users of Other can set up a number of different stored messages, as well as set quick access to make a telephone call to that person. The really interesting thing about this app, and the fact that might differentiate it from any other similar type of an app, is that the developer has actually gone a little above and beyond with the functionality.

Rather than making it a simple messaging launcher app, the developer has actually integrated some excellent 3D Touch shortcuts that can instantly send messages using Quick Actions directly from the Home screen. There’s also a native Share Sheet extension which allows users to send things like URLs from Mobile Safari, and documents from within other apps installed on the device.

Regardless of what you want to send, it seems that Other has you covered. Try it now for free.

(Download: Other for iPhone, iPad and iPod touch from the App Store)