Saurik, or Jay Freeman to his friends, is the man behind not just Cydia but many of the inner workings of the iOS jailbreak scene. He’s also the guy that brought WinterBoard to the world, the most popular iOS theming platform on jailbroken iOS devices. He’s also an all-round awesome and super clever guy, which is why this next news doesn’t surprise us that much.

Just a few minutes ago, Saurik tweeted that he has just launched two apps on the Google Play Store. That’s right, Saurik’s now got is fingers into the Android ecosystem, and in a big way. The two apps in general are a great debut for Saurik on the Android platform, with Cydia Substrate and WinterBoard now available to download for free. 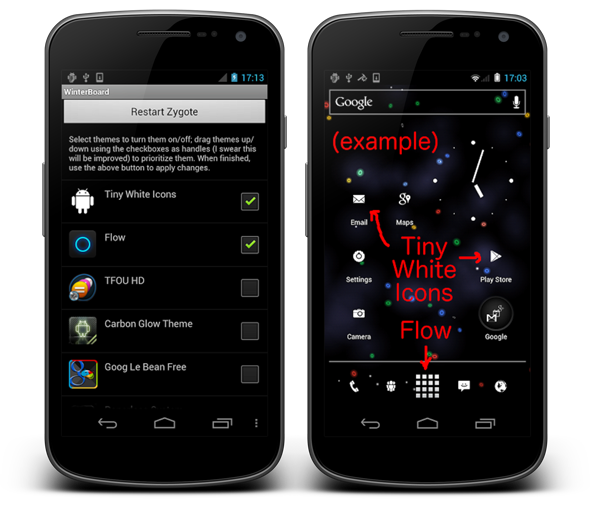 Predictably, both apps require a rooted device, but you’re all rooted by now anyway, right? Right. So, WinterBoard is pretty self explanatory if you’ve ever come across the Cydia app – you can download theme packs to change just about every facet of the Android experience just like iOS, and whilst it’s obviously super early in the development process, we suspect it’s only a matter of time before things really kick off. Cydia is literally full of themes for WinteBoard, and the Google Play Store will no doubt be the same as time passes by.

That’s WinterBoard, but what about Cydia Substrate? Well, for starters you’ll need Cydia Substrate in order to use WinterBoard, and it’ll be used as the crux of future apps, too. Cydia Substrate itself won’t actually look like it’s doing anything on its own, mainly because it isn’t. Like we said, Substrate will only spark into life when another app is installed that uses it, just like WinterBoard. With Substrate being the glue that holds the iOS jailbreak system together, it’s sure to become an integral part what where Saurik intents to take his Android development going forward. In simple words, yes, your favorite iOS jailbreak tweaks will eventually make their way to Android. That’s a big plus point. 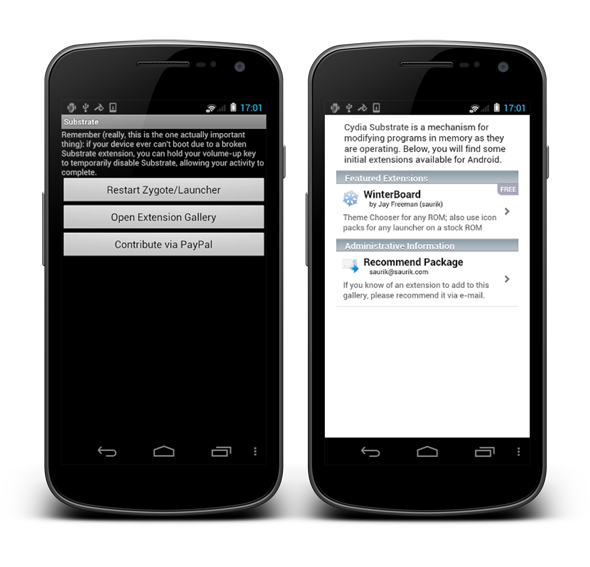 We love WinterBoard on iOS, and Substrate’s obviously needed in order to make that particular brand of magic happen. Both arriving on Android is great news for those that like to theme their smartphones, and it’ll be super easy, too. Cydia Substrate requires that you have Android 2.3 Gingerbread and beyond installed on your device, but considering it’s 2013, that shouldn’t be a problem.

It’s early days for sure, but exciting days too.

(Source: Cydia Substrate / WinterBoard for Android on the Play Store)

Alternatively, you can download the APKs directly from: CydiaSubstrate.com