A new gaming device promises to make it possible to use PlayStation 3 controllers with Xbox 360 consoles, and vice versa.

The great thing about having more than one gaming platform out there is the choice that it affords. If you prefer Microsoft’s Xbox 360, then you can buy one. Like the Sony option of the PS3? Then that’s the device you go for. Simple.

The problem comes when you find yourself stuck somewhere in the middle. What if you’re a particular fan of, let’s say, Halo, but just cannot abide that controller? Well, you’re out of luck, really.

But what if you could have your cake and eat it, too? What if you could play the awesomeness that is Halo but still use that Dual Shock controller that you’ve grown to love so much over the years? Well, you may just be in luck. 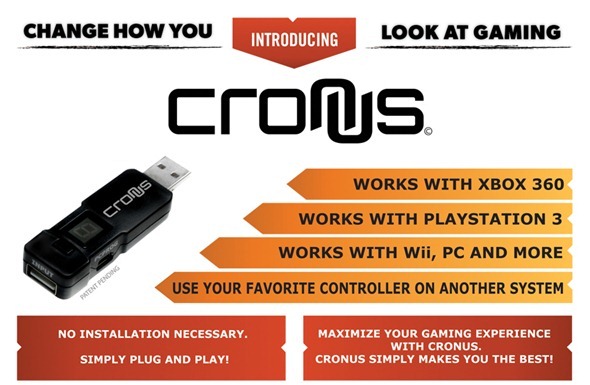 A new little device from RaptorFire, called the Cronus adapter, has the potential to make it possible to use a PS3 pad with an Xbox 360 and vice versa. Sounds good, right? Well yes, yes it does. But what if we told you that Nintendo’s Wiimotes were also thrown in for good measure?

The device itself is a simple little black USB dongle with a USB port on the rear. Plug the thing into your console of choice and away you go. Well, sort of, but you get the idea.

Uses for the device are obviously a little slim. There is the idea we outlined earlier of people simply not liking a particular type of controller but preferring the library of games from a particular machine, but that isn’t really enough to make a business out of. The scenario the device’s makers is pushing is one where a gamer visits someone’s house for a spot of multiplayer gaming but the number of controllers is limited.

The problem though, is the price. The Cronus adapter is expected to retail for around $50 to $60. Whether that price is low enough to stop you simply buying another controller depends on yourself, really, but it is an interesting situation to be in.

Expect to see the Cronus Adapter begin appearing in stores within the next couple of months.