PersistentAssistant Enables You To Have A Continuous Conversation With Siri

Have you ever felt that you are in a no-win situation when trying to have a conversation with Siri? After all, Apple advertises their digital assistant as being ‘intelligent’, but considering you have to tell her/him/it when you want to talk, it doesn’t seem that it’s enabled all the time for me. For those who are wondering what I am talking about, having a back and forth conversation with Siri is the equivalent of waking a friend up to tell them something, only for them to fall right back to sleep when you are done. 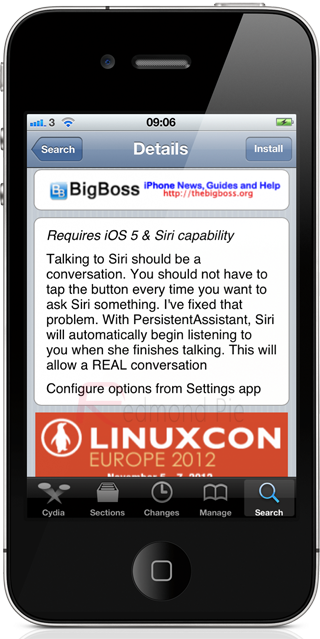 No longer shall we have to suffer at the hands of the ignorant Siri, thanks to iOS developer Bradley Friedman and his PersistentAssistant tweak that is available from the jailbreak store, Cydia. Putting the rather catchy name aside, the package is actually a rather interesting and useful one, and certainly something that I haven’t seen done before or even thought about. When it comes to using Siri for a lot of users, including myself, it seem to have fallen into Apple’s way, which is pressing and holding the Home button to invoke it.

So what exactly does the PersistentAssistant do? Well, the package is one of those which really does only one thing, which in this instance makes sure that Siri stays alert during a conversation, or in other words; making sure the digital assistant remains ‘persists’. When the tweak is enabled, Siri will remain functional and alert from the first moment the user invokes the assistant until the time it is dismissed from view or cancelled away by pressing the Home button. In a stock installation of iOS, this isn’t the case, and even after Siri has been called upon, users find themselves having to tap the Siri button every time they want to ask or tell it something. 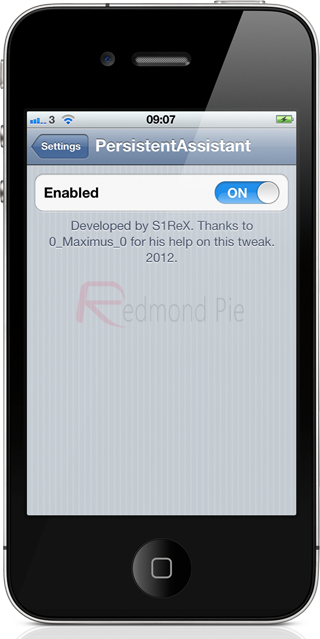 I suppose the real benefit of the PersistentAssistant tweak is to allow what feels like a real conversation to flow between Siri and the user, meaning that every time Apple’s creation stops talking, it immediately begins listening for the user’s voice interaction – just as it should be in all honesty. After installation, PersistantAssistant doesn’t append the home screen with any additional icons but does come with a simple options panel through the Settings application. Users will have the ability to toggle the tweak or on off, something that all mobile substrate offerings should have in my opinion.

PersistantAssistant is available as a free of charge download from Cydia and requires a Siri capable device with iOS 5 or above installed.