Could These Be Shells Of The New iPad Mini? Probably Not [IMAGES]

Now that we are officially into the month of August and are pretty much certain that Apple is planning on holding a media event during the first two weeks of September, I think we can officially start looking forward to what they might have in store for us. The event is looking like it will take place on September 12th with speculation centered around the possibilities of Tim Cook and his team introducing us to the new iPhone as well as a couple of new iPods and the much talked about iPad Mini. The jury is still out on whether the sixth-generation iPhone will make an appearance, but the rest seems a distinct possibility.

As we move closer to the media event and the possible unveiling of the iPad Mini, we are going to be inundated with rumors and conjecture about possible technical specifications and the overall aesthetics of the device. This isn’t anything new in the iOS device world and is a regular occurrence in the run up to the launch of any new product from Apple. Staying true to form, a Chinese Apple blog has posted some images onto their site that allegedly show the outer rear case of Apple’s new baby iPad.

In this instance, we are overly keen to point out the use of the word allegedly, as something about the look of the purported case just doesn’t ring true. The terrible quality of the images doesn’t help when identifying unique aspects of the shells, but others are also keen to point out that the parts don’t even contain an aperture for Apple to embed a camera into the device. Tablets in the same class like the Nexus 7 don’t have a rear-facing camera, so it is possible that Apple is keeping this release in line with its competition, but considering all of their other mobile devices have cameras, it would seem like a strange move. 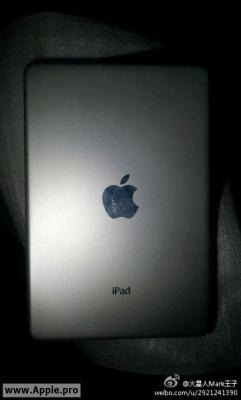 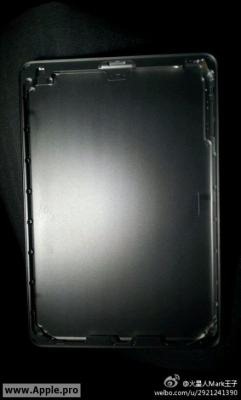 In all honesty, the terrible quality of the images make it extremely difficult to inspect the intricacies of the case and makes us wonder whether these are genuine or not. It was only last month that we saw some additional shots posted that also claim to be from the new iPad, but in that case, a space has been made for Apple to include a camera. Without a way to know for sure I would hazard a guess that these shells are just an elaborate creation and aren’t a true representation of what we will see from Apple next month. Either way, the idea of a miniature iPad has me excited already.