You’d clearly need to have been living offline to have missed the buzz that is being created by Pokemon Go, with even mainstream media now picking up on the phenomenon that shows little sign of abating. In fact, Pokemon Go is now so big, even Donald Trump and Hillary Clinton are using the game to help in their campaigns, presumably in an attempt to appeal to those who would normally perhaps not vote at all.

Not content with announcing that it would host a campaign event at Madison Park in Lakewood, Ohio, which doubles as a PokéStop, the Clinton campaign has really been leaning on the success of the Pokemon Go smartphone game by name checking it wherever possible. 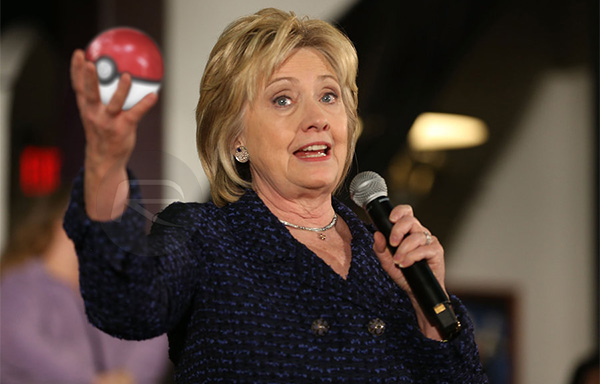 When speaking about creating jobs, Clinton found a way of dragging Pokemon into the discussion. “I don’t know who created Pokemon Go, but I’m trying to figure out we get them to have Pokemon Go to the polls,” Clinton said during the speech. Voter turnout is always an issue during any kind of election, and Clinton seems keen to use a popular game as a way to try and bolster the number of people who vote – presumably in her favor.

But if Hillary Clinton isn’t the one you are going to vote for, you’ll be unsurprised to learn that even Donald Trump can’t avoid Pokemon Go. When asked whether he played the game, he said “I don’t, but people are playing it. No question about it,” he responded. “I do not. I wish I had time.”

Speaking of everyone’s favorite billionaire, Donald Trump has also been the subject of a letter penned by over 140 technology leaders, which includes Apple Co-founder Steve Wozniak, who perhaps unsurprisingly, are not fans of Trump or what he stands for.

We believe in an inclusive country that fosters opportunity, creativity and a level playing field. Donald Trump does not. He campaigns on anger, bigotry, fear of new ideas and new people, and a fundamental belief that America is weak and in decline. We have listened to Donald Trump over the past year and we have concluded: Trump would be a disaster for innovation. His vision stands against the open exchange of ideas, free movement of people, and productive engagement with the outside world that is critical to our economy — and that provide the foundation for innovation and growth.

Say what you want about Donald Trump, but he sure knows how to get a reaction from people. Unfortunately, it’s usually a bad one.