Although many of the large consumer electronics companies outsource their work to China, the number of legitimate products produced within the world’s most populous country is eclipsed by the number of fakes lurking about. Apple is the usual target of the fakery, and although none of us would consider purchasing the grossly inferior rip-offs, it’s certainly entertaining to look at them – particularly when placed alongside the real deal.

This time around, it’s Samsung, or specifically, its Galaxy S III which has been emulated, and although, as I said before, the $200 copycat wouldn’t have me reaching for my pocket, it’s certainly one of the better knockoffs we’ve featured here at Redmond Pie. If you own the S III, or have spent a great deal of time salivating over it online until you can get your hands on it, then you would probably notice the tell-tale signs if you saw it in Best Buy. However, if you’re not so familiar with the relatively-new smartphone, you could easily be tricked into believing it was a legitimate product. 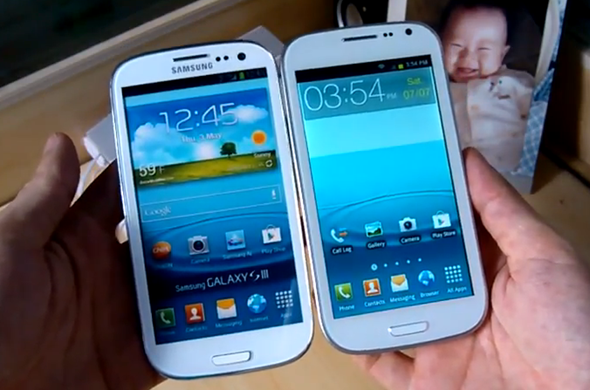 It’s called the HDC Galaxy S3, and boasts a rather decent-looking 4.7-inch TFT screen. As seen in the video, it takes a decent photo with its 5 megapixel snapper, and although the 1GHz processor and 512MB of RAM looks like chicken feed next to the quad-core prowess of its law-abiding counterpart, its by no means a pushover.

In the demonstration, which we discovered via GizmoChina, the smartphone operated relatively smoothly, and although it certainly wouldn’t go the distance in terms of battery life and longevity, whoever created it has done their homework in creating a very kosher-looking device.

One thing I cannot get my head around, however, is why the “Samsung” logo is present on the back of the device, but not the front. Were the makers suddenly overcome with guilt in breaching each and every one of the Korean company’s patents in re-hashing the same device, or was it just an oversight? I would suspect the latter to be true, but whatever the case, it was one of very few slip-ups, and although a hands-on always gives a bad fake device away, from a visual aspect, it’s spot on.